Book Review: 'Hollywood Movie Stills: Art and Technique in the Golden Age of the Studios'

Hollywood Movie Stills: Art and Technique in the Golden Age of the Studios by Joel W. Finler 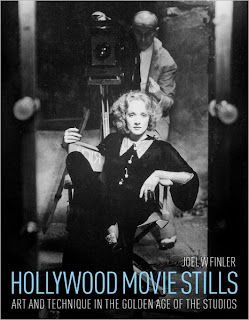 If you've ever read a book on movies, chances are you've seen movie stills. Whether you know it or not, these often iconic photographs of movie scenes and their stars usually weren't taken directly from the films themselves. Rather, most of them were shot after the movie cameras were done rolling by a separate still photography unit. These still photographers had particular techniques developed for their brand of photography that were utilized to make the movie stars shine even brighter, some of which were adopted by the makers of motion pictures. Stills are also of great importance as a record for how films were made in the early days, since many “behind the scenes” shots were taken. And then there are those films which have been lost to the sands of time, but which live on in some way through still photos. All this and much, much more can be learned by reading Jeol W. Finler's Hollywood Movie Stills: Art and Technique in the Golden Age of the Studios.

It would be hard to imagine a more comprehensive volume on the subject of still photography in the movie business than Mr. Finler's well researched tome. The writing style is a bit stiff and academic, but that shouldn't deter those who have an interest in the subject. Casual movie enthusiasts may find it to be a bit more information than they want on the subject, but even they should appreciate the many fine examples of the still photography art form that illustrate the book.

This is an updated version of a previous edition. The text is more or less the same, aside from a few corrections, but a great deal of new photos and captions (which in the case of this book are fairly extensive and often contain as much pertinent information as the main text) have been added.
Posted by Bob Ignizio at 12:00 AM