The Big Fix (now on video)

[THE BIG FIX is now available on home video.] 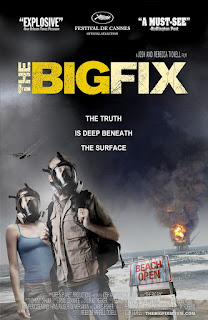 Seeing the name of Lions Gate on a DVD is always sort of portentous, kind of like the old Nicholson/Zarkoff/Corman American International exploitation factory. Lions Gate gave the world the SAW series, a number of disagreeable gangsta-rap crime flicks (and one really good crime flick, TIC, that was disguised as a disagreeable gangsta flick under the tag MOB RULES), and miscellaneous horror and sci-fi and other downmarket genre stuff. In short, you can kinda tell they're in it for the money. And you know what? Sometimes I rather dig that, instead of the big studios acting all high and mighty and parading out their Oscar-bait costumers when we all know they'd rather be counting cash from sucky WEEKEND AT BERNIE'S or HOME ALONE sequels.

But when I saw the Lions Gate imprimatur on THE BIG FIX I was surprised. This was an eco-documentary, not torture-porn. Or is it torture-porn after all? In which the victim just happens to be the Earth?


Or at least a nearby part of it. The angry feature concerns the BP/Deepwater Horizon oil-well blowout of 2010, and it's blistering in more ways than one. The film is the work of filmmaker and Louisiana native son Josh Tickell, who, along with his wife Rebecca (the former child actress who starred in PRANCER) has made a couple of well-received documentaries on alternative-energy fuels.

The Tickells' damning chronology of events includes a pre-credit sequence more or less blaming British Petroleum's regime-change medding in Iran for the 1970s revolution and rise of that country's Islamic-fanatic regime (thanks guys) that send the world looking for other places to drill-baby-drill - like off the Louisiana coast. The April 21 (Earth Day), 2010 failure and sinking of the Deepwater Horizon oil rig took place, spewing ton after ton of crude into the Atlantic, with multiple attempts to stem the flow failing. It was a PR disaster for BP, but, we are told, after a while the marriage of William and Kate got the shortsighted attention of the hoi polloi, and everyone said that the spill was under control, the beaches clean, the fish and shrimp safe to eat. The Tickells beg to differ.

Here, after visiting the affected waters and beaches of the Gulf of Mexico, Rebecca erupts into skin rashes and "chemical pneumonia." It turns out tons of "Corexit" toxic solvents were simple dumped into the ocean to "clean up" the crude, or, more likely, just break it up into layers of gunk floating under the water's surface or tarring up the seabed, just out of sight. Yet authorities maintain the area is safe.

A Rolling Stone reporter confirms the coverup. Shills for BP include academics and politicians who told the media there was no cause for alarm (one goes on David Letterman - guess that corporate practice of merging TV news with entertainment divisions is worse than even I thought); later on, the Tickells show us, these same folks got lots of BP subsidies in their various businesses.

The muckraking (or tar-ball-raking, at times) expose gets a little too show-bizzy for its own good, with star power via appearances by actors Peter Fonda (a co-producer, with Tim Robbins) and Amy Smart, and gratuitous Burning Man inserts. Not mentioned however, is Kevin Costner and his proffered oil-skimming invention.

Still, the scathing piece scores in shaming the capitalist pathologies that led to the Deepwater Horizon horror, and the scars that still fester even as powerful forces try to minimize an eco-disaster of planetary proportions on behalf of a cost-cutting industry skimping on caution to enhance its billions. You won't soon forget the portrayal of Louisiana as not so much a state as a backwards "oil colony," its regulators hopelessly corrupt and incompetent (some of the oil cleanup teams measured toxins simply by...smelling stuff. Yes, with their noses).

Finally, there's a US government that's only a puppet of the polluting multinationals and their lobbyists. Republicans may get a thrill hearing that President Barack Obama is arguably worse than  the much-criticized George W. Bush in extreme-bowing to oil interests. No, Republicans won't like it; even their cherished Tea Party is proven to be smeared with oil-lobby money, in a cosmic zoom out from BP's little Gulf spill to multinational corruption and planetary-extinction-level capitalism.

Some viewers might be reminded of Oscar-winner THE COVE when Tickell and his co-conspirators check out the forbidden beaches undercover with infrared cameras - and wonder if that isn't filmmaker grandstanding. But it's hardly an offense compared to BP's depredations. One may want to think twice about Gulf vacation plans this summer after seeing the Big Fix - and think twice about Lions Gate as a mere releasing entity for foul crap. That description might more adequately suit BP. (3 out of 4 stars)