[BEYOND THE BLACK RAINBOW screens Thursday August 2nd at 5:30 pm and Friday August 3 rd at 9:30 pm at the Cleveland Cinematheque.] 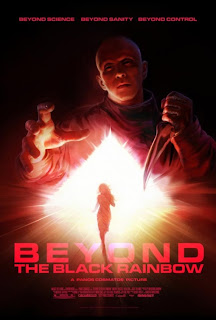 If only for its sterile retro-futuristic set design, abrasive cinematography, Tangerine Dream meets John Carpenter synthesizer score, and some arresting bad acid trip visuals, BEYOND THE BLACK RAINBOW would be a film worthy of attention. That it uses these elements to create a compelling atmosphere is without question. Whether there's really enough here aside from that to warrant a feature length film is not so certain; BEYOND THE BLACK RAINBOW feels like a good idea for a 20 or 30 minute short that has been stretched to the breaking point at nearly 2 hours.

The main action is set in 1983, but first we're given the set-up via an infomercial for the mysterious Arboria Institute narrated by its founder, Mercurio Arboria (Scott Hylands). He informs us that the goal of the Institute is to help people achieve happiness and inner peace. The institute, he assures us, “[is] at the forefront of neuropsychology and new therapeutic technologies.” At the end of the tape, the attentive viewer will notice a copyright date of 1966, meaning Arboria has had almost two decades to work towards their goals. What we see of the institute in its early eighties present doesn't look particularly happy, though.

A mute woman named Elena (Eva Allen) is confined to her room, evidently a prisoner. She's forced to undergo some of those “new therapeutic technologies”, administered by the wig-wearing Dr. Barry Nyle (Michael Rogers). Elsewhere in the institute there's some kind of weird glowing pyramid that seems to have some connection to Elena, although exactly what it does is unclear. As the film goes along, the secrets of the institute are slowly parceled out, but to say that everything is explained or that the answers given are completely satisfying would be untrue.

The influence of early David Cronenberg films on writer/director Panos Cosmatos is undeniable; one can easily imagine the Arboria Institute being just down the road from THE BROOD's Somafree Institute, and the psychic powers Elena possesses aren't dissimilar from those displayed by the central characters in SCANNERS. The imprint of other, even more avant-garde filmmakers like David Lynch and Kenneth Anger is apparent as well.

Cosmatos clearly has a particular vision in mind and the talent to pull it off, but it's hard to figure out what his point is beyond an exercise in style. It feels as if the film has something to say, but it's vague to the point of incomprehensibility in the way it says it. There are some interesting scenes and ideas, but also long stretches that are tedious and frustrating. Despite all its issues, this writer still found BEYOND THE BLACK RAINBOW enjoyable. That most viewers will share that assessment seems unlikely, but for those who have read this review and still find themselves intrigued, it may be worth taking a chance. 2 1/2 out of 4 stars.