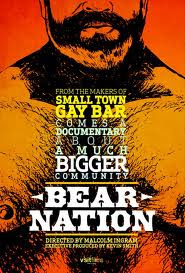 Not long ago I complained on this blog thusly: for a man who isn't gay I seem to get assigned an inordinate amount of gay movies to watch, by all my various freelance publishers. Like I'm being subjected to some fiendish hidden psychological experiment of longstanding. Like instead of the standard "KICK ME" sign secretly taped to my shirt back in school someone wrote "MAKE THIS GUY WATCH LOTS OF GAY MOVIES," and I still haven't noticed it's there. Like God is making me one of His little jokes - or maybe making me a Job-like example to others of what could happen.

I mean, the other day a spirit materialized in front of me and said, "Mr. Cassady, what the hell? Why in the world are you watching so many damn gay movies? If it were me I'd go crazy!" I consulted with Mary Ann the Ghost Buster, who identified the apparition. It was Vito Russo (mild chuckle in the back of the auditorium from the one or two people who got that one).

Yet Another Gay Movie I had to do? BEAR NATION. And I'm taking you all down with me...

The nonfiction feature is from a certain Malcolm Ingram, a director whose previous docu was SMALL TOWN GAY BAR, distinguished for two reasons, first as one of the few gay movies nobody paid me to see yet, and secondly for getting the attention of high-profile filmmaker/pop culture guy/comics fanatic and self-described media whore Kevin Smith. Smith came on board (he-he, Charles said "came") as executive producer of BEAR NATION, and it's rather easy to see why the subject appealed to both his potty-minded knack for dick jokes and such - and an (arguably) deeper and more thoughtful subject matter.

The title refers to a homosexual-subculture-within-the-subculture - one I already knew not because I'm gay but because it was explained in detail as a farcical sidebar one of Gideon Dafoe's very funny The Pirates! satirical novels (which I got paid to review - the books, not the CGI movie adaptation earlier this year). It seems that in the LGBT underground, "bears" are hairy/bearded, bull-necked, burly gay guys - as pointedly opposed to the stereotypes of limp-wrist sissies or chiseled-physique demigods as clean-shaven as a Greek marble statue or Tom of Finland model.

Ingram's camera thus penetrates (he-he, Charles said "...camera") into the denizens of bear habitats in London, Chicago (cited as the major cruising territory of Great Lakes bears; guess things would have different if our city's major sports franchises were the Cleveland Bears and the Cleveland Cubs) and Italy. Inevitably, there are a plethora of collegiate "bear" puns. Subversively edited Smokey-the-Bear PSAs of yesteryear, raise the expected giggles. But no, no clips of Yogi and Boo-Boo, no Winnie Pooh, no Kung Fu Panda. Those guys have lawyers.

The scrutiny of bear culture ambles to the bear facts - primarily "coming out" (seems many of these bears did so late in life, after marrying and siring children), self-acceptance and realistic male body images. And something that struck me as likely to cause candlelight vigils, Stonewall protest marches and boycotts of the Cleveland Movie Blog if me or Mitt Romney said it instead of the gay interviewees - the proposition that bears are a more honest expression of male-on-male love than bitchy Broadway chorus-boy types or "fabulous" drag queens. Those, one bear fancier opines, are just men wanting be women. Wow, holy the-way-black-people-can-say-the-N-word-and-whitey-can't, Batman! Yet the topic of "bear behavior" and whether a slightly built, clean-shaven guy can also be a bear brings up questions about LGBT inclusion, marginalization, bigotry and definitions of what it means to be "queer."

It's fun to see the interior of a Chicago bear bar where the mounted deer trophies sport leather-bondage gear, and hear about the shocked reaction of the hapless cleaning crew to the after-party antics of a hotel bear convention. Still, the shaggy-bear expedition starts looking a little tired and repetitious at the hour mark. That's when Kevin Smith himself arrives, in the comfortable environment of his iconic Jay And Silent Bob's Secret Stash Store, giving a stand-up-like interview-soliloquy about bearishness and his own status as a bear sex-symbol, a fact he finds charming despite his flagrant heterosexuality.

Love him or hate him, Smith always has something to say, and the makers of the BEAR NATION DVD, no fools they, run his already-long segment unedited as an "extra." Whether that's a recommendation or a warning is, I guess, all in the eyes of the bear-holder. Bears may be better gays because there's more of them to love, but I still think this particular bear piece could have done well to lose a little girth.

I'll say one thing for BEAR NATION, it sure puts into a whole new perspective the "Care Bears" franchise, which was foisted upon the world by Cleveland-based American Greetings - who ignored my job applications repeatedly, so I can't offer any insider explanation better than the theory that the Care Bears symbolize, well, bears. Remember how the Care Bears were always depicted spurting out rainbows from their lower abdomens? I'll leave you with that imagery now. Why should I be the only one tonight with trouble sleeping? (2 1/2 out of 4 stars)