A Review in Retconned* Tweets by Charles Cassady, Jr.
*It is sad that I even know what “retconned” means. 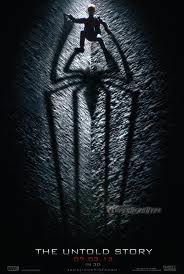 Okay, the studio security protocols in my being able to see THE AMAZING SPIDER-MAN in advance were only slightly less strict that those at Los Alamos. I wasn't allowed to FaceBook about Spider-Man, blog about Spider-Man, Tweet about Spider-Man, until the release. Hey, I barely even wanted to SEE another damn superhero movie, let alone write about it.

Furthermore I'm not all that keen on social media. I do it because, as a book author (which I am, but don't be too impressed - it was a fallback career after newspapers all laid me off), word in the trades is that it was the way to go to connect with a potential readership. Social media is also considered a potential job skill - likely an urban myth perniciously circulated by ISPs, device manufacturers and Mark Zuckerberg - and boy do I need employment.

So I sometimes post things on FaceBook and send out Tweets, and I must admit it can be satisfying and even cathartic (see also James, LeBron; Cleveland, revenge on). But mostly it's just work. I get bored very quickly doing social media, and I have very few followers. If you do want to follow me, though, my Twitter handle is "cassxdy." Sometimes I do clever stuff, I guess.

But the restriction on Tweeting about AMAZING SPIDER-MAN led me to wonder: If I actually were into Tweeting hundreds of times a day, as much better-paid critics and entertainment-world pseudo-journalists are, what would I say? And how dare Disney-Sony-Marvel-Sony-TriStar-BP-Wall Street or whatever corporation owns the rights take away my freedom (Like Doctor Doom Takes Away Freedoms of Latverians!!!).

So, now that it's after the fact, here instead of a standard review is probably what I would have Tweeted during the elite THE AMAZING SPIDER-MAN press-screening (if I happened to possess any portable computer gizmo capable of Tweeting at all).

See for yourself if I would have done all that much harm.

0 hours 0 minutes: I wonder what LeBron James is doing now?
0.02: Director of this thing is "Marc Webb?" Oh please. My critic name for this should be Orb Weaver.
0.03: I wonder what LeBron's doing now?
0.05: New actor as teen Peter Parker is Andrew Garfield. Reminds me a little of James Franco and Jake Gyllenhaal
0.05: (cont'd) both once considered 2 be Spider-Man if Tobey Maguire asked too much money.
0.06: Martin Sheen as Uncle Ben. Guess someone had 2do it but whyyyyy?
0.06: Sally Field as Aunt May. Guess someone had 2do it but whyyyyy?
0.07: Emma Stone plays Peter Parker's high-school girlfriend Gwen Stacy. Thought she'd outgrown stuff like this.
0.08: I wonder if there's an alternate universe in which LeBron actually regrets leaving Cleveland? Nawwww...
0.10: Villain in this shaping up as Dr. Curt Connors, AKA the Reptile. Or is the The Lizard? I forget. I know in one of
0.11: (cont'd) the Sam Raimi Spider-Mans this character was introduced. Now different actor, Rhys Ifans.
0.12: Boy am I exhausted from part-time min-wage job. Maybe I can sleep through any of this…?
0.15: Wonder what was last movie Andrew Sarris saw before he died? Can it be charged w/manslaughter?
0.16: Spider-Man starred in Obama inauguration comic, remember? Im not seeing more jobs roundhere R U?
0.17: Latest Cleveland Art Prizes are declared. Somehow the whole topic depresses me utterly.
0.20: This is shaping up a less cartoony Spider-Man than the Raimi ones. Is that good or bad? And it's damn
0.20: (cont'd) SPIDER-damn-MAN! What's the point in trying 2be realistic?
0.26: If LeBron were still here they'd've given him all the Cleveland Arts Prizes. All of them. Towns such a suckup.
0.30: Product placement: REAR WINDOW poster in Peters bedroom; I don't quite get it. Ilford B&W photo
0.30: (cont'd) paper in PP's bedroom, which I do get.
0.31: I'm told real 35mm B&W film costs $10/roll now? Sad, though I've gone digital too.
0.32: This is kind of draggy.
0.39: Pparker has mechanical web shooters instead of mutant ones growing out of arms like in T. Maguire
0.39: (cont'd) portrayal. Why? (1)Faithful 2comic books (2) Toy companies can sell madeinChina toy web
0.39: (cont'd) shooters now. I've seen them. Looks like having bulky red taser on each wrist.
0.45: SPOILER ALERT: Uncle Ben dies. Sorry if I ruined anything.
0.46: If I'd left town like LeBron long ago, would I be champion of something now? I wonder what...
0.50: P.Parker not bitten by radioactive spider this time but genetic-altered one. More people probably care about
0.50: (cont'd) that than comparing the Obama-vs.-Romney economic policies.
0.51: Romney doesn't have a chance at presidency, unless Democratic Obama does something reallyreallyreally stupid.
0.52: Obama may well do something reallyreallyreally stupid; he's a Democrat. That's what GOP bankng on.
0.53: One-armed Dr. Connors injects self with formula, turns into monster Lizard. But I've seen the action
0.54: (cont'd) -figure version months now, no surprise. In fact he kinda looks like friendly alien reptile
0.54: (cont'd) in THE LAST STARFIGHTER, remember that? Just bigger&digitalized, w/ a tail.
0.60: Okay this is getting more cartoony. I'll never get my nap now.
1.01: Denis Leary as Gwen Stacy's dad? Guess someone had 2do it but whyyyyy?
1.06: Emma Stone has a line emphasizing her character is 17. Yeah, right. 27, maybe.
1.10: Mad scientist Lizard sets up own laboratory in NYC sewers? With lighting & power? Yeah, right.
1.14: I wonder what LeBron is doing now?
1.15: My neighbor in Lakewood was Brian Michael Bendis, now star Marvel Comics writer-artist. He left town too,
1.15: (cont'd) 4 Portland, and his career really took off. I don't see hater mobs here burning his books!
1.16: ...No, Bendis doesn't communicate with me anymore either.
1.18: Daily Bugle hardly in this. No J.Jonah.Jameson seen. Maybe in this Marvel universe newspapers are
1.18: (cont'd) out of business. Cause anything else would be too unbelievable.
1.20: Lady bus monitor bullied on YouTube gets $.5million. Wish someone would bully me on YouTube. I'd settle4 250 grand.
1.21: I'm starting 2predict dialogue b4 characters utter it, which is always bad sign.
1.22: In Spidey persona PParker talks too much like guys from Jersey Shores.
1.23: I failed to mention, this is in Real3D. It fits the Spider-swooping, action, but I could live w/out it.
1.23: I wonder what LeBron's doing now.
1.25: Can't believe there's a Broadway musical Spider-Man also. Haven't noticed a plug here yet.
1.26: My funny video slamming Broadway musical Spider-Man: http://www.youtube.com/watch?v=A2__AMv7Qps
1.30: Spidey and Lizard are fighting a lot. Well, what was I expecting, Dostoyevski?
1.31: Stan Lee actually did once compare Spider-Man to Dostoyevski. I hope Andrew Sarris never saw that.
1.33: Stan Lee's cameo in this is actually pretty funny.
1.40: Every day I wake up hoping its still circa 1996 & I can still pull life together avoid most of this s**t.
1.43: Was afraid AMAZING SPIDER-MAN would be 3-hour origin epic w/multi supervillains, but wrapping up pretty fast.
1.44: Still, they're dropping lots of character names, setting groundwork for Andrew Garfield sequels.
1.46: Hey, nobody used that “with great power comes great responsibility” line.
1.47: …Maybe it tested poorly with all-bully focus-group audience.
1.50: G.I. JOE sequel bumped to 2013 was good news. Can they do same for rest of 2012 blockbusters?
1.55: I dunno, I guess this is okay. I think I outgrew comic books except the Harvey Pekar type.
2.02: I went to Syracuse University for this? Irrelevant to movie, I just say that2myself 10times/day.
2.10: Already buzz is this is inferior to Raimi Spider-Man flix. But I think it about even. Raimi's had more humor
2.11: (cont'd), good lines, length, musical numbers. But if this one’d come out in 2002 and Raimi's Spidey with Tobey Maguire
2.11: (cont'd) v Green Goblin were the "new reboot," it would be judged lesser instead. 6/one, 1/2 dozen the other.
2.12: They keep bringing up portentious hints about Peter Parker's late parents. Big secret buildup to sequel, big deal.
2.15: My wife calls this 6 times better than THE AVENGERS. OK, now I can cut AVENGERS off my 2see-list.
2.16: Best superhero website still Superdickery.com. But more DC/Justice League oriented, I gotta warn ya.
2.17: When I was kid cinema seemed a worthier art form than it is now. Andrew Sarris would agree.
2.18: I wonder what LeBron's doing now. (2 1/2 out of 4 stars)
Posted by Charles Cassady Jr. at 12:01 AM