[YOUR SISTER'S SISTER opens in Cleveland on Friday June 29th exclusively at the Cedar Lee Theatre.] 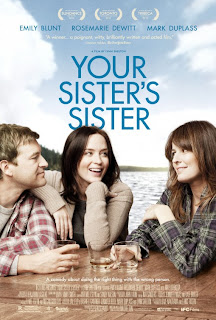 It's been a year since Jack's (Mark Duplas) brother died, but he still hasn't recovered from the loss. In hopes of getting him back on track, Jack's best friend (and his brother's ex-girlfriend) Iris (Emily Blunt) offers him the use of her family's island vacation home. There he can spend some quiet time alone in thought, free from the distractions of the outside world. Instead of helping, though, Jack's getaway winds up complicating his life even further.

Upon arriving at the house, Jack finds Iris' lesbian half sister Hannah (Rosemarie DeWitt) already there. Iris has just broken up with her long time girlfriend and is busy drowning her sorrows with tequila. Jack joins her, and as so often happens to those under the influence of the infamous libation, bad decisions are made resulting in a one night stand.

Jack wakes up feeing regretful the next morning and becomes even more so when Iris shows up unexpectedly. He begs Hannah not to mention anything about their drunken tryst because, this being a romantic comedy, the whole “friend” thing is really just a cover for the feelings Jack and Iris have for each other, but are afraid to admit.

Writer/director Lynn Shelton handles this material deftly, successfully mining it for both comedy and pathos. The cast is excellent as well, giving us characters that are believable and refreshingly light on quirkiness. Sure, they pepper their conversations with a good amount of sarcasm, but that's about right for people of this particular generation and background. At any rate, the fact that the characters come across as so genuine and fully fleshed goes a long way towards selling what is frankly a pretty absurd premise.

Perhaps the most refreshing aspect of the film is that when the truth inevitably comes out, the characters deal with it like adults. Even when further revelations about Hannah's reasons for having sex with Jack make things messier, the film never resorts to rom com clichés and oversimplifications. There's no gender bashing, no victims or villains; just three people who care about each other trying to deal with the complexities of life and love depicted in a way that's funny without going over the top and sincere without being cloying. 3 out of 4 stars.