[TEEN A GO-GO is now available on home video.] 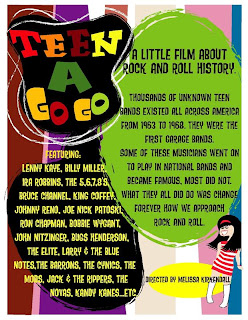 I'm still kind of amazed, even three decades after the announcement, that pariah metropolis Cleveland actually got the Rock and Roll Hall of Fame and Museum. The thing is, as everyone should remember, cities from New York to LA all campaigned mightily to build the official rock museum. Memphis, I understand, put up a particularly strong fight. That the facility wound up in Cleveland I can only ascribe to the most astounding act of diplomacy since Jimmy Carter brought Israel and Egypt to the peace table...or maybe blackmail. Someone in Cleveland City Hall or the old Growth Association learned that top Rock Hall guys were really Watergate informant "Deep Throat," skyjacker D.B. Cooper, the true JFK assassin, missing heir Michael Rockefeller, the bushy-haired stranger who killed Marilyn Shepard, and an incognito Jimmy Hoffa, all hiding out together. If we didn't get the Rock Hall, Cleveland would release to the media the secret files J.Edgar Hoover had on all of them. Can you prove it didn't go down that way?


Nonetheless, this being the Rock Hall of Fame City, every once in a while I like to pretend I know a thing or two about rock and roll. That act even got me a six-year-gig as a music columnist in one of our weekly newspapers (until the inevitable mass layoffs). When in fact, all I had as training was a 1982 copy of the Rolling Stone encyclopedia - and lots and lots of marathon rockumentary-viewing.
.
Typical of the kind of titles that made me an instant rock snob? TEEN A GO GO, a cute, new short-feature oral history of the overlooked rock scene in yet another city nobody associates much with rock and roll (thus, who with proper blackmail/negotiations, may well have nabbed the Hall of Fame and Museum for themselves). It is the little piece of Bush family backyard known as Fort Worth, Texas.

Fort Worth, we're told, bloomed with rock bands amidst the early-1960s British Invasion, when it came to the attention of area young males that by becoming musicians they could get lots of female attention without being jocks. Thus were formed Larry & the Blue Notes, the Elite (the "Fab Four of Fort Worth"), the Chaunceys, the Orphans, the Cynics, the Barons, the Jades, the Mods, the Harlequin Vipers, the Wayds, the Excels, Neurotic Sheep, Eric & the Norsemen, Jack & the Rippers and more. Who? You might ask? Good point, as it's observed that despite a Dick Clark-type TV showcase and a colorful Col. Tom Parker-type producer (named, no kidding, Major Bill Smith) rushing recordings to England all the time, none of the acts ever broke big and put Dallas-Fort Worth on the rock map the way that Nirvana did for Seattle. Candace Chase, bassist of the all-girl Kandy Kanes, tells of playing an ambitious away-tour of clubs in Boston's "combat zone" district, and after two different club managers got shot during their engagement she and the band decided to stick to home soil. NYC-based rocker and historian Lenny Kaye observes that Fort Worth produced more consistently excellent garage bands than either coast.

So the once-teen rock elders speak, recalling, for example, how a local Bigfoot/crypto-creature, the Lake Worth Goat Man, inspired the Larry & the Blue Notes cult hit "Night of the Sadist," which was amended clumsily to "Night of the Phantom" after the FCC decided "Sadist" was a naughty word. Performing at Fort Worth hotspots, like the title Teen A Go-Go and a place called the Cellar - where Secret Service agents partied the night before Kennedy was shot - the bands pleased rabid fans, like the girl who booked all the Elite in one hotel room for a command performance, just for her. By the late 1960s, though, the scene was all over. "Corporate lackeys" get scapegoated here, with a key Texas radio stations blithely changing their format from local acts to cookie-cutter commercial top-40 and big record -industry labels not paying attention to anyone not based in NY or LA. But the fact that young musicians grow up and have to get real jobs and support families probably had something to do with it as well. Now the former Lone Star stars hear about their old 45s bagging a fortune on eBay and remember when they dumped heaps of the vinyl into the river because it wasn't selling.

The narrative thus has no strong spine or finale, but it's educational for rock hounds and a great nostalgia trip, though even better if one is from Texas. And it begs that question, then, when is Cleveland's definitive rock-and-roll documentary retrospective going to be made? Several books on the subject already exist (shoutout to Gray & Co., publishers), but I personally can't recall any sweeping survey of NE Ohio artists of yesterday and today in docu-feature form, or is it only because my Rolling Stone encyclopedia is woefully out of date? (2 1/2 out of 4 stars)