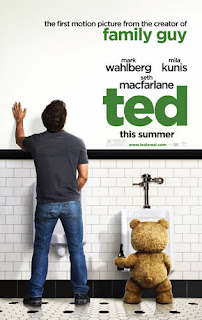 TED was Seth MacFarlane’s last chance to win me over. I won’t say I don’t respect the man – he’s a hard worker who has managed to build himself a cozy primetime empire out of nothing but some college animations and a handful of low-hanging pop culture references – but I’ve never been partial to his work. Still, whether or not I enjoy Family Guy or its even less palatable sister programs, I was hoping MacFarlane  would avail himself of the silver screen’s expansive diameter and muster something of broader topical scope – perhaps even richer artistic depth – than the Griffins’ interminable, chaotic  rabble of celebrity pot shots, insipid film homages and quotidian obscenities.

It was his last chance, and he failed. With soaring, stratosphere-breaching colors.

The trailer pretty much says it all: John Bennett, an awkward 8-year-old loner magically wishes his plush bear, Teddy, to life. 25 years later, the two inseparable friends remain locked in a state of adolescent immaturity, spending their days drinking, smoking weed and watching the films of their shared childhood, as John’s (Mark Wahlberg) increasingly impatient girlfriend Lori (Mila Kunis) begs him to ditch Ted (voiced by Macfarlane) and move on with his life.

Ted’s a cute, fuzzy teddy bear. And he gets high and swears a lot. It’s a quarter-assed nugget of dead-end ironic juxtaposition that, from our first glimpse of present day Ted - a close up of the fluffy grizzly sucking a bong – feels toothless in that extra cringey way where the writers’ (MacFarlane and a couple Family Guy veterans) palpable desperation to create something “edgy” actually serves to sand down what few snagging corners the piece may have had. Incapable of the effortless, debauched élan of Peter Jackson’s still-squicky MEET THE FEEBLES, TED wanders a comedic desert, repeatedly confusing its setup – a foul-mouthed bear and a wasted Bostonian walk into a bar – for the punchline.

If MacFarlane was content to cash out with 90 minutes of coke-dusted vulgarities brayed out from a boorish bear’s Peter Griffin-cloned vocal cords, I may have been able to dismiss the whole thing as a stoner-baiting lark, unmemorable as it was vacuous. But he has to raise himself one hackneyed romantic storyline. Just when you're relieved to see that Ted’s not on screen, in kicks John and Lori’s relationship: a blandly predictable, sentimental mawk in through which the movie’s one and only theme – the lady-deflating potential of Apatowian  man-child syndrome – is regular hammered, then sledge hammered, then outright stated by Kunis’ character: if Bennett doesn’t give up his Teddy Bear, he’ll never grow up. My attention folds.

The good news is that the endless inane  flashbacks and “remember that time”s  of Family Guy notoriety are all but absent.  The bad news? This means that the aforementioned lazy pop culture references are forced into double duty, filling every bare corner of celluloid with a mix of contemporary name-checking cruelties (Ted declares an exaggeratedly sour musical number “better than Katy Perry.” Pretty clever, right?) And ham-fisted, over-engineered ‘80s nostalgia, including an entire subplot devoted to Mike Hodges 1980 adaptation of FLASH GORDON.

The single scene that is a flashback? MacFarlane and his actors recreate, wholesale, the disco scene from AIRPLANE! Meaning, the actual jokes in the scene are, you know, from AIRPLANE! Adding nothing to the characters, plot or tone of the film, the scene serves only to let the audience know that, definitively, Seth MacFarlane has seen AIRPLANE!

Is our culture so self-absorbed and desperate for self-congratulation that the bare experience of understanding a joke supersedes the quality of the joke’s content and delivery? Or is the current state of mainstream pop culture truly so dire – it’s financial and artistic shepherds so lost to indolent greed - that we’ve made the collective decision to regress, to cannibalize our collective cultural memory into the ad hoc disposable humor of Internet memes and movies like TED?

While I certainly won’t spoil the ending, know this: if TOY STORY 3, in all its wit and heartfelt earnestness is about our ability, in maturing, to sustain the collective creative  joy of youth through the continued  dissemination of humanity’s  greatest  gift – the unfettered potential of the human imagination, TED is about the hoarding of cultural wealth, and of the trademarked properties and copyrighted dreams we endlessly, selfishly reassemble for our own fleeting satisfaction because, hey, it’s easier than making something new. (1 out of 4 Stars)
Posted by Matt Finley at 12:01 AM