[Press release from The Studio on Mars.] 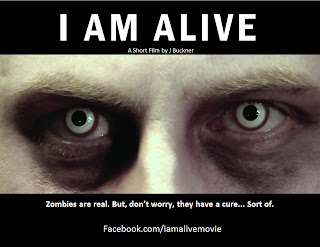 J Buckner and The Studio on Mars present the new short film "I Am Alive". World Premiere screening at The Beachland Ballroom on Sunday July 15th. Along with the premiere screening of "I Am Alive", J Buckner will be showing some of the other short skits and music videos created by The Studio on Mars. Following the screening local music acts Presque Vu and Galactic Moustache will be performing. For more details go to www.facebook.com/iamalivemovie or www.beachlandballroom.com

Where: Beachland Ballroom 15711 Waterloo Rd. Cleveland, Ohio
When: Sunday July 15, 2012 @ 8pm
Price: $6 per ticket
Tickets can be purchased at www.beachlandballroom.com


Zombies are real! The zombie apocalypse is over and the nation has started to rebuild. Society is
attempting to return to normal. Unfortunately there are still thousands of shambling zombies roaming
the country side. But, don’t worry, the Government has a cure... sort of. The story centers around a
small group of "Recoveries" (the PC term for Zombie) slowly easing their way back into humanity thanks to a Government induced cure which includes regular Group Therapy meetings. But sometimes the cure is worse than the sickness, especially when you're caught between the world of the living and the world of the living dead!