Seeking a Friend for the End of the World 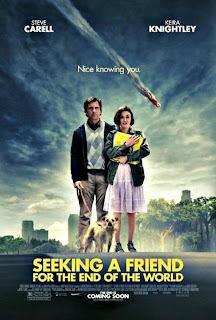 How do you want your apocalypse? Do you want the end of the world to be slow, lugubrious and pseudo-majestic, as in Lars von Trier's stunningly pretentious MELANCHOLIA? I prefer the approach of Lorene Scafaria, the writer and director of SEEKING A FRIEND FOR THE END OF THE WORLD. Scafaria's smart, funny and poignant screenplay imagines how people actually might act if the end of the world were near.

Our hero is a mild-mannered New Jersey insurance salesman named Dodge, played by Steve Carell. The cable news networks have an onscreen counter ticking off the days till annihilation by an asteroid destined to collide with the Earth (“21 Days Left”), and people are either indulging in depravity or continuing to go about their business. In one of the film's most amusing sequences, management at Dodge's firm tries to interest the few lingering employees to fill vacated positions. “If anyone wants to be Chief Financial Officer....anyone?”

Dodge's unhappy wife walks out on him and, sensing the futility of everything, he tries to relieve his loyal housemaid, Elsa, of her duties. But everyone copes in her own way, the film seems to say, and so Elsa carries on cheerfully as though nothing is wrong.

Dodge and Penny's fates entwine, and as they hit the road with a Toto-like dog in tow, SEEKING A FRIEND becomes an eventful road movie with sweet, mournful overtones. Dodge hopes to get Penny on a private plane to England, and Penny, who “dabbles” at jobs and is obsessed with old vinyl LPs, tries to enable Dodge to find his lost love. The journey becomes an exploration of the past for the mismatched pair – Penny revisiting an erstwhile boyfriend who now has a survivalist bunker and a plan to repopulate the Earth, Dodge reconciling with an estranged parent. There are surprises along the road, some gruesome (a doomed trucker who picks up the hitchhiking pair) and others amusing (a chain restaurant called Friendsies, where everyone is your friend and stoned out of his mind).

The acting in this movie is just right. Carell plays Dodge with a nice balance of anguish and resignation; Knightley, despite a tendency to grimace unattractively in emotional scenes, is appropriately charming.

Where the road leads is not a mystery, but how the characters get there and what they discover en route is exquisitely handled. The end of the world can be depressing and nihilistic (see von Trier, Lars), or it can be inspiring. Maybe it seems odd to say that a film about the end of the world is inspiring. Can there be hope in a story in which everyone is fated to die? Yes, of course. Because that is the story of everyone who lives. 4 out of 4 stars.