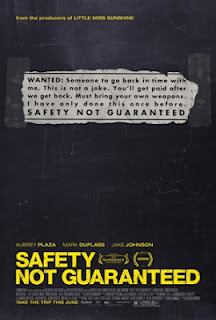 has played April on the NBC sitcom “Parks and Recreation” since 2009.
But SAFETY NOT GUARANTEED finds the 28-year old comedienne from spreading her wings in unforgettable fashion.


Plaza plays Darius, a depressed college grad who isn’t sure about her future.  She lives with her father—who notes her unhappiness—and interns at a magazine run by misfits.  Despite her intelligence, Darius can’t land a paying job as a waitress because of the palpable gloominess surrounding her.


“You’re just not a quality hire,” concludes one restaurant manager.


Seems Darius hasn’t quite gotten over the death of her mother, who died making a convenience store run for her then-ungrateful daughter.  But there’s hope; our heroine’s favorite song is “Somewhere Over the Rainbow.”


Fortune throws Darius a lifeline when she’s recruited by goofy columnist Jeff (Jake M. Johnson) to help investigate an enigmatic classified in a local newspaper:   Wanted. Somebody to go back in time with me. This is not a joke. You'll get paid after we get back. Must bring your own weapons. I have only done this once before. Safety not guaranteed.


Darius joins Jeff on an Escalade adventure to Ocean View, Washington, where they trace the message to a reclusive grocery store clerk named Ken (Mark Duplass).  Also along for the ride is intern Arnau, a brainy biology student who wants to diversify his resume at the cost of enjoying his youth.


Jeff sees the assignment as a working vacation, and hopes to make a love connection with an old fling.  But he strikes out with Ken, who doesn’t register any emotional pain in the writer’s eyes.  So Darius is dispatched to answer the ad instead.


The pretty intern earns paranoid Ken’s approval and spends weeks learning firearms and hand-to-hand combat in the woods behind his house.  She dutifully reports back to Jeff—who becomes smitten with his ex-girlfriend—but harbors serious doubts about her paranoid partner’s time-travel proposition.  Ken isn’t bad with a pistol, but his sorrowful jujitsu skills and love of all things WARS do little to dispel others’ perception of him as a weird, harmless dreamer.  But this apparent lonesome loser has a few secrets of his own.


Image-minded Jeff turns his attention to geeky Arnaut, urging the bespectacled bookworm to take an active interest in the opposite sex and enjoy a couple beers at a high school football game.  Seems Arnaut is just as socially inept as Ken.


Meanwhile, Darius infiltrates Ken’s confidence by telling him her “mission” is to return to a past where her mother still lives.  Satisfied, the tight-lipped Ken welcomes Darius into his private world.  His exploits (such as a late-night burglary at a medical laboratory) continue to baffle, but Darius drops her guard when her host reveals a softer side.


Is Ken’s scheme legit?  Does he make good on his promise to turn back the clock for both of them, or is he just some misguided hack collecting mechanical parts in his garage?


It doesn’t matter.  SAFETY NOT GUARANTEED isn’t really about time travel—not unless you’re talking about capitalizing on the here-and-now.  Director Colin Trevorrow and writer Derk Connolly wisely focus on the characters and their motivations rather than technology and action.  Duplass (who plays a heartachingly vulnerable Ken) is no slouch himself; the CYRUS and JEFF, WHO LIVES AT HOME filmmaker is himself a master storyteller when it comes to dissecting the concerns of (fleeting) youth and themes of risk and regret.  It’s spirit—not science—that powers this flux capacitor, and this charming script (based on an Internet meme) brought the 2012 Waldo Salt Screenwriter’s Award to Connolly’s mantel.


The movie title isn’t referencing the dangers of actual time travel, but rather the potential psychic burdens of simply living day to day, in real time (notwithstanding jokes about dinosaurs and elves).  SAFETY is a clever, funny little picture with a little chicken soup for the dreamer in each of us.  The cast of relative unknowns truly make their characters spark, from Karan Soni’s shy Arnaut and Jenica Bergere’s fragile Liz to Duplass’ disarming Ken—who serendades Darius with sweet zither-song by firelight.  These people resonate because they’re fickle, fallible, faith-challenged—and therefore plausible, if not dowrnight likeable.  3 ½ out of 4 stars.