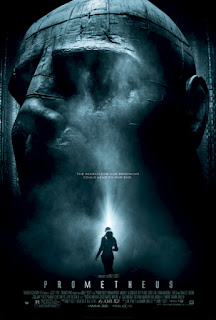 The perfection of Ridley Scott’s PROMETHEUS is matched only by its absurdity.  The ALIEN director is unclouded by conscience, remorse, and delusions of originality when it comes to revisiting a legacy he helped create.


Indeed, PROMETHEUS hits more beats from sequels like ALIEN RESURRECTION and (gasp) ALIEN VS. PREDATOR than fans of the xenomorphic franchise can stomach (pun intended).  Scott’s latest epic presents a mysterious pyramid hiding lethal secrets, shows the caesarean removal of an alien pregnancy by high-tech salad tongs, has supervisors monitoring video feeds from companions’ helmet cams, and features another artificial person with an ambiguous agenda.  Said synthetic even swishes a basketball like Ellen Ripley’s misbegotten clone.  And this time there’s not one but two reanimated severed heads:  Hello, Bishop!


Fortunately, most of the action occurs on the titular ship, or is centered on H.R. Giger’s memorable “space jockey” set, like the one that had Tom Skerritt’s wondering what-the-cuss.

The year is 2093. Dr. Elizabeth Shaw (Noomi Rapace) and archeologist boyfriend Charlie (Logan Marshall-Green) hope to find Man’s origins on a distant world shown in old cave paintings, but other scientists aboard Prometheus aren’t so sure.  Especially Meredith Vickers (Charlize Theron), a sexy-but-serious executive assigned to the intergalactic vessel to safeguard Weyland’s trillion-dollar investment.  And whose daddy issues run more deeply even than Shaw's.


The intrepid explorers might find what they’re looking for on the strange planet.  We know going in they’re going to find something they’re not looking for.


An immense, hollow dome is littered with the corpses of space jockeys.  The results of a gross-out alien autopsy suggests their matches ours; humanity likely derived from the dead moon-hoppers.  But what killed them?


A damp, gloomy inner sanctum houses hundreds of knee-high vases, all forebodingly arranged like the face-hugger pods from ALIEN.  All it takes is one accidental touch from an unwitting visitor (or several deliberate touches from a Machiavellian shipmate) to set in motion a horrific chain of events that eventually—and quite literally—births the movie monster series we know and love.


The film kicks in high gear after a gruesome emergency operation in a coffin-like medical capsule.  There’s a confrontation with a cosmic cobra and a tryst with a tentacled terror with more on its parasitic mind than just breakfast.  The surviving Prometheus personnel scurry to stop a malevolent contagion from spreading, possibly to Earth.


Meanwhile, inquisitive android David (Michael Fassbender) grapples with the meaning (if any) of his soul-less existence.  Wouldn’t it piss you off to think you’re nothing more than another appliance on a rocket full of fancy toys?


A crucifix necklace and ring serve as vestiges of faith in a nightmarish network of catacombs where Divine Creation is brushed aside along with Darwinism.  And if those symbols don’t steel your nerves, Prometheus also boasts a Christmas tree, a Rubik’s Cube that doubles as a video projector, and an accordion once owned by Stephen Stills.


The special effects are superlative, even if the ship displays look like they were stolen from THE AVENGERS’ Helicarrier. LED displays on translucent (or nonexistent) screens cast the same familiar blue glow we see on hardware in most contemporary sci-fi pictures.  Haunting holographic videos of long-dead humanoids—cleverly projected in Pointillism—amp the suspense and offset the buckets of traditional blood and guts.   The 3-D is put to further use by a couple floating spheres that survey the gooey tunnels with crimson lasers.  Their geologist owner calls them “pups,” but they’re more like mechanical canaries in a coal mine.  The titles reveal the word PROMETHEUS one alphabetic notch at a time until the letters are apparent, recalling ALIEN’s unique hieroglyph.  The cinematography by PIRATES OF THE CARIBBEAN ace Dariusz Wolksi is top-notch, but Marc Streitenfeld’s score doesn’t hold a candle (or flamethrower) to Jerry Goldsmith’s beautifully eerie themes.


Rapace is a modern-day Ripley, a petite firecracker who leaves no man behind.  But it’s Theron and Fassbender who chew up the scenery.  Theron’s project coordinator is a wolf in sheep’s clothing, a suit who gradually drops her guard and entertains clear-headed Captain Janek’s (Idris Elba) propositions.  Fassbender’s synthetic is a fastidious Felix who dusts the ship and babysits humans during their two-year hyper-sleep.  His identity crisis parallels that of the hero in LAWRENCE OF ARABIA, which the robot watches in a rec room (and whose handsome protagonist inspires his new haircut).


For all the big questions it raises, PROMETHEUS doesn’t capture that magical spark—that potent mix of marvel and shock—that captivated audiences thirty-three years ago. Despite all the aural and visual pizzazz, it’s an overly complicated affair that won’t give audiences the same bump-in-the-night chills ALIEN caused a generation ago.


In fairness, Ridley isn’t entirely to blame.  The script was written by John Spaihts and Damon Lindelof (Lost), a pair of Scott aficionados who trade slasher simplicity for highbrow horror.  They muddle through it, only to send folks home with a disappointing sense of déjà vu rather than the kind of post-traumatic cinema stress that gets people talking.  The film works well as a stand-alone late night thriller, but it’s difficult (if not impossible) to absorb while trying to pretend ALIEN doesn’t exist, or that the fate of the Nostromo isn’t somehow connected to the Prometheus pandemonium.


The film is likewise burdened with Boba Fett Syndrome.  Seems the more one learns about enigmatic peripheral characters (like the WARS bounty hunter or ALIEN’s space jockey), the less cool they are.

For another opinion, click here.
Posted by Peter M. Roche at 12:01 AM