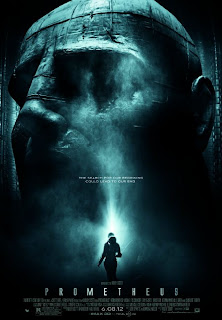 Because movies cost a lot of money to make, and the studios that release these movies like to make that money back along with a profit, marketing can sometimes be deceptive. Last year, there were those who griped that the trailer for DRIVE made it look like a fun action/car chase flick when, in reality, it was more of a violent art film. Now we have Ridley Scott's PROMETHEUS, which is being marketed very aggressively as a prequel to his 1979 masterpiece ALIEN.

Up to a point, that's accurate, but those going into PROMETHEUS expecting more of the same will likely be disappointed. Scott isn't interested in expanding the mythology of the ALIEN films, at least as we've known them so far. Instead, his imagination was fired by the fossilized remains of the Space Jockey we see briefly in the original ALIEN. What were these beings, where did they come from, and what connection do they have with the human race? Those are the questions that PROMETHEUS concerns itself with, not how do we find an excuse to bring Sigourney Weaver back to fight monsters yet again.

The film begins in a similar fashion to Kubrick's 2001: A SPACE ODYSSEY as we see events taking place millions of years ago with little in the way of explanation. A strange humanoid creature drinks a strange black liquid and dissolves into a raging river, and by doing so seeds life on this planet (Earth?) with his DNA.

The film then flashes forward to the year 2089 on Earth as archaeologists Elizabeth Shaw (Noomie Rapace) and Charlie Holloway (Logan Marshall-Green) make a discovery that may point to mankind's origins in the stars. With the help of a little corporate backing from the dying Peter Weyland (Guy Pearce) and his Weyland Corporation, the scientists and a small crew that includes android David (Michael Fassbender), Captain Janek (Idris Elba), and company representative Meredith Vickers (Charlize Theron) set off into space to hopefully meet their makers.

There's plenty of action and suspense of a traditional sort once the starship Prometheus arrives at its destination, but there's also a good bit of food for thought. Scott and screenwriters John Spaihts and Damon Lindelof are playing with big metaphysical concepts here, both overtly and symbolically.

The idea that children turn on their parents/creators is a major theme throughout, spoken overtly by David who says, "doesn't everyone want to kill his parents?" Rapace's Elizabeth represents the flip side of this coin, still very much missing her deceased father and holding on to faith in her Father in Heaven despite the seeming evidence that mankind was created not by God, but by an alien race.

At the same time, though, the creators seem very much intent on destroying their creations. But why? There are possible answers contained in the film, but to a large degree PROMETHEUS leaves it open to interpretation.

This is one of the most ambitious and thought provoking sci-fi films to come out from a major studio in some time. It's a film that raises a lot of questions, and doesn't necessarily feel obligated to provide clear cut answers, trusting its audience instead to be smart enough to find answers on their own based on what the film has given them.

Not everything in PROMETHEUS works perfectly. Some of the characters should have been more fully fleshed out, in particular Elba's captain and his two loyal crewmen. A little more clarity about some of the film's more confusing aspects (in particular David's motivations) would have been appreciated, as well. As for the ALIEN connection, it is eventually made very clear in the film's final scene, but whether that's a good thing or not is debatable. The movie would arguably have worked just as well, if not better, without its final beat.

No one needs to be told how good a filmmaker Ridley Scott is at this point, do they? Every scene looks fantastic and lasts just as long as it needs to, not a second more. As for the actors, this is the kind of truly international cast, picked based on whether they were right for the role rather than box office potential, that one rarely sees these days. Rapace cements her place as the most bad ass female action heroine today, following up her indelible lead performance in the original GIRL WITH THE DRAGON TATTOO trilogy. As strong a presence as she is, she almost gets eclipsed by Fassbender's android. We've seen the almost human robot who wants a soul before, but Fassbender plays this part so subtly that we're never entirely sure he doesn't already have one. Good work from everyone else, as well. 3 1/2 out of 4 stars.

For a different take on the film, check out the review by the Cleveland Movie Blog's own Pete Roche here.