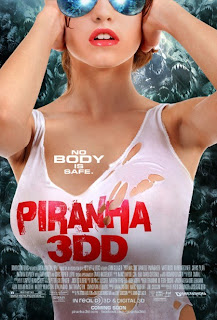 It's not hard to find fault with PIRANHA 3DD. The screenplay is pedestrian, the acting amateurish, and the direction and editing are competent at best. But really, what did you expect? This was made to be mildly amusing, disposable trash that delivers on the “3 B's” of exploitation as put forth by Joe Bob Briggs (i.e. blood, breasts, and beasts). It's not good enough to rise above genre and have any lasting appeal, but it's a serviceable enough horror comedy in the moment.

A year after the events of PIRANHA 3D, prehistoric piranha have once again managed to find their way into a town's water supply. In particular, the flesh eating fish have been drawn to a water park scheduled for a grand reopening involving strippers and David Hasselhoff as lifeguards. The park is run by sleazy businessman Chet (David Koechner), who refuses to listen to the warnings of his step daughter (and 49% partner in the park) Maddy (Danielle Panabaker).

To the surprise of no one watching, the park opens as scheduled, and after the requisite scenes of partying and female nudity, the carnage begins. Adding some fun to the proceedings are Ving Rhames and Christopher Lloyd reprising their roles from the first film as well as a brief scene with Gary Busey, and of course, the Hoff. I also appreciated that the sequel was less mean spirited and more campy fun than the first one, although there are still one or two scenes that pushed my personal limits for goreomedy.

Anyway, the movie does have its moments of entertainment value. Not enough to give it a recommendation, but enough that I'd cautiously say check it out if you liked the first film and/or just have a taste for campy violence and gratuitous female nudity in general.

Oh yeah, should probably mention that I watched this "on demand" via VUDU, since this movie didn't open in any Cleveland area theaters. And since I do not own a 3D TV, I had to settle for the flat version. It's doubtful the 3D would have improved matters much, though. 2 out of 4 stars.
Posted by Bob Ignizio at 12:01 AM