[LOLA VERSUS opens in Cleveland on Friday June 22nd exclusively at the Cedar Lee Theatre.] 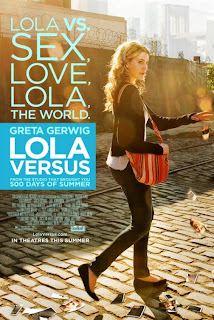 Daryl Wein specializes in films about narcissistic New York singles with romantic problems. Lest you think that ground has been already well covered by Woody Allen and others, Wein and his screenwriting partner, Zoe Lister Jones, bring their own particular flavor to the subject — and it's not a flavor everyone will like. Their 2009 debut, BREAKING UPWARDS, was about a pair of reportedly annoying 23-year-olds strategizing their breakup. Their new film, LOLA VERSUS, is about an annoying 29-year-old dealing with a recent breakup. I am sensing a pattern here.

LOLA VERSUS has the advantage of Greta Gerwig, the erstwhile “mumblecore” star turned mainstream actress (GREENBERG). Gerwig has a distinctively mutable face that eludes description – is she pretty, plain, or just off-kilter? You can't stop looking at her, even if the character she plays, a grad student named Lola, is often unlikable. We first encounter Lola in a romantic idyll with her live-in boyfriend, a painter named Luke (Joel Kinnaman). Luke proposes marriage, unleashing the usual romantic-comedy wedding-planning activities and introducing us to Lola's quirky, sophisticated parents, played by Debra Winger and Bill Pullman.

Daunted by the impending wedding, Luke panics and breaks the engagement, sending Lola into the tailspin predicted by her astrological readings about her Saturn return. Like all romantic-comedy heroines, Lola is surrounded by friends – wisecracking best pal Alice (co-screenwriter Lister Jones) and curly-haired college buddy Henry (Hamish Linklater), with whom Lola can guzzle jug wine and giggle the night away. Henry harbors a long-term crush on Lola, so he can become a convenient “rebound” lover for the lonely Lola.

**We interrupt this plot description for a word from Reality. Let us consider the universe in which this movie takes place. Lola is 29, living in New York with no visible means of support aside from occasionally (and lackadaisically) waiting tables at her parents' restaurant. She's working on her doctoral dissertation in French literature and, after moving out of her ex-fiance's loft, returns to the mythically affordable Manhattan apartment she sublet to another girl. Additionally, there's nothing about Lola's self-indulgent preoccupations that suggest “serious literature scholar.” We now return you to your regularly scheduled movie review.**

Lola's recovery from her broken engagement is complicated by the fact that Luke has a new, beautiful girlfriend but still wants Lola in his life. Other men just don't do it for her, including a pretentious rollerblader who picks her up at the fish counter at Rose & Daughters. She treats her friends, especially the sensitive Henry, horribly. She hits bottom when she has a meltdown at a party, culminating in a drunken spree that includes pole dancing in a strip bar (behavior that seems more psychotic than inebriated).

The screenplay has some humor and humanity, enhanced by good performances. It also leans gratingly on contemporary bourgeois buzz words: iPad, Match.com, colon cleansing, Pilates, macrobiotics. It also imagines that someone (Alice) might actually say things like, “I gotta go wash my vagina,” or mistakenly ingest Oxycontin because she's mistaken it for Oxytocin, the sex hormone. It has nothing new or original to say about life or relationships.

Depending on which side of 29 you are, there are many things about LOLA VERSUS that you might find irritating. But the film is not without merit. It is well photographed and fluidly directed, allowing Gerwig to demonstrate the range and depth of her considerable talent. 2 1/2 out of 4 stars.