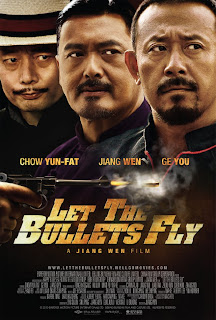 LET THE BULLETS FLY is an action packed caper film with a healthy dose of humor set in 1920's China. When the bandit “Pocky” Zhang (Jiang Wen) and his gang rob a train carrying Ma Bandge (Ge You), the new Governor of Goose Town, it turns out to have been for nothing: there isn't any money on board. Bandge, posing as his counselor (or is it the other way around?), suggests that Zhang take the Governor's job himself and make money that way. Zhang agrees, taking Bandge and his wife along with him. The arrival of this new (phony) official does not sit well with local crime lord Master Huang (Chow Yun Fat), and as the various factions plot and scheme to come out on top, the stakes quickly escalate.

Much of the film revolves around issues of identity; since Ma Bandge lies so much, we're not sure if he's really the governor or just the counselor, Huang has a body double, and just why is it that Zhang lacks the distinctive pock marks his face is supposed to bear? Then there's the scene where two opposing groups wind up wearing the exact same masks and can't tell friend from foe. Perhaps it's meant to reflect a certain identity crisis in modern China, although the film seems far more concerned with being entertainment than with any kind of subtext.

There are echoes of YOJIMBO/A FISTFUL OF DOLLARS in the way Zhang at times plays Huang and Ma Bandge off of each other, not to mention the almost Western vibe of the period setting. There's also a resemblance to Steven Soderbergh's OCEANS films, albeit with subtitles and more violence. Bullets certainly do fly, but this is as much a battle of wits as it is of gunfire.

Chow Yun Fat plays a little against type here, exemplifying the old saying about “old age and treachery” more than his action film image. Jiang Wen, perhaps best know to U.S. audiences for his role in Zhang Ymou's RED SORGHUM, has a great stoic screen presence and more than holds his own with the iconic Fat. He also proves a real triple threat, having also written and directed the film, and in which areas he also excels. The action scenes are well staged and gripping, but just as much attention is paid to dialogue and careful plotting. The result is a smart and hugely entertaining film. 3 1/2 out of 4 stars.
Posted by Bob Ignizio at 12:01 AM