[THE INTOUCHABLES opens in Cleveland on Friday June 8th exclusively at the Cedar Lee Theatre.] 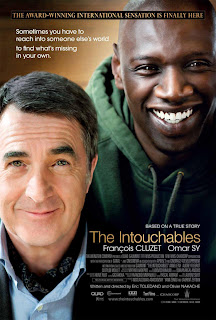 Inspired by true events, THE INTOUCHABLES tells the story of a Sengalese immigrant (and something of a conman) named Driss (Omar Sy) who answers a want ad to be the personal assistant for wealthy quadriplegic Phillippe (Francois Cluzet). He doesn't really want the job; he just wants someone to sign his papers saying he applied and was turned down so that he can continue to get his government benefits. To that end, Driss does everything at the interview he possibly can to insure he doesn't get hired, but improbably winds up getting the job on a trial basis.

Later in the film, Phillippe tells an associate concerned about his choice of caregiver that he picked Driss because he wanted someone who wouldn't treat him with pity. For his part, Phillippe doesn't treat Driss with pity, either. Driss goes so far as to mock his employer's handicap on occasion, albeit gently and without malice. Nor does Phillipe pity Driss for his poverty and family problems. None of which is to say that the men don't empathize with each other, and over the course of the film they forge a friendship based on respect, each one helping and learning from the other without condescension.

To be sure, there's something of a DRIVING MISS DAISY feel to this premise. Jay Weissberg of Variety even goes so far as to accuse the film of “Uncle Tom racism”. That seems a bit of an exaggeration, though. If anything, class is far more of an issue in the film than race. Regardless of how one views it, though, the characters are both presented as and treat each other as equals.

THE INTOUCHABLES's worst crime is that it's a little schmaltzy, but even that gets mitigated to some degree by the blunt yet still compassionate way these two friends treat each other. Of course the film oversimplifies some of the problems it addresses, and that's a valid criticism. Still, for a film that seems more focused on entertaining and uplifting an audience while sneaking in just a touch of lightweight commentary, it's a relatively minor one.

Whatever its shortcomings, the film is entertaining. Both Omar Sy and Francois Cluzet turn in fine performances (in France Sy actually beat out Jean Dujardin's performance in THE ARTIST to win the Cesar (French Oscar) for Best Actor), and the writing and direction manage to connect on an emotional level without being too saccharine. A Hollywood remake is almost inevitable. 3 out of 4 stars.