Hipsters (June 29th and 30th at the Cleveland Cinematheque) 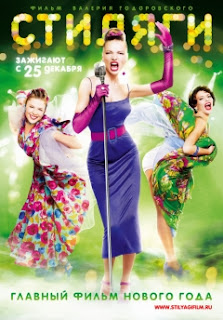 Ever had false-memory syndrome? I think I just did; probably the reason I'm not being called as a witness at the Jerry Sandusky child-abuse trial. Besides, as far as Jerry Sandusky goes, I say anyone named after an Ohio city is automatically guilty. Movie director Chris Columbus? Guilty as hell, whatever he did. Give him the maximum.

But I had false memory syndrome of actually having seen the 2008 Russian musical HIPSTERS a few years ago. Nothing definite, just a sense that I beheld and enjoyed the nostalgic tone and the cast and all that; it was a real crowd pleaser, and I smugly predicted it would go on to become Russia's DIRTY DANCING, and a worldwide smash. I probably told all of you to go buy those shares of stock in the studio or anything that Russian director Valery Todorovsky touched if you all wanted to get rich, like everyone else was getting in early 2008, remember?

Well, instead the economy crashed, and everybody got poorer (except for one percent, of course), and, it turns out, now that I've gone over a review DVD, I hadn't seen HIPSTERS after all. Possibly my impressions were just a melange of other pictures, most likely emotional scars left by SWING KIDS, remember that one? A quasi-musical dance drama about jazz- and swing-loving youth defying the Nazis in Hitler's Germany to dance and admire the likes of Django Reinhardt. The critical Gestapo condemned it, but I do think SWING KIDS found a certain following among the teens to whom it shamelessly pandered.

HIPSTERS also panders, is also a calculated mass-audience crowd-pleaser - remarkable enough, I'd say, for a generation who probably had no idea Russia's film industry was capable of that feat - but I'd say it's better than SWING KIDS by far, and certainly more visually inventive and surreal. Setting is Moscow in 1955, the USSR still barely out of the nightmare shadow of Joseph Stalin. It turns out the world metropolis (Moscow is really a great character here all in itself - or do even the Russians shoot everything in Toronto or Vancouver now to save money like everyone else?), while chilly and Communist-grey on the surface, harbors an fizzy underground movement of jazz buffs and swing dancers. Some of them are disaffected WWII veterans, some are even powerful bureaucrats off Party time, but most are young "hipster" kids infatuated with western styles and glamor. I would guess the proper term for this youth clique is "Stilyagi," as that is the picture's Russian title.

(Either that or "Stilyagi" translates as "stupid western-decadent Americans, you wait until year 2008 for your Wall Street greed to eat itself up and bring rest of world economy down with you?" Hey, I don't speak Russian. Maybe I should have learned. I might have considered it, but the Cyrillic alphabet intimidated me. Something Klingon-like about it, no? Then again, I'm sure our lettering rubbed them the wrong way too)

Anyway, the plot: Mels is a 20-year-old medical student in a Communist-dominated school. While taking part in a disciplinary raid lead by his grimly uniform classmates on a hipster dance, Mels falls into love at first sight with gorgeous blonde hipster chick Polina AKA "Polly." That's enough to lure Mels into the taboo (but hardly secret) subculture. Using the right passwords he gets a pompadour and a bright zoot-suit makeover. Via the black market he obtains a subversive instrument, the saxophone. Via a phantom  jazzman he teaches himself the horn practically overnight. Via a Russian translation of the Kama Sutra he gets Polly. You know, I don't think this flick is terribly realistic.

That's okay, I don't think it's supposed to be. HIPSTERS is a genuine musical, not just a narrative that happens to integrate dance numbers; every so often a bunch of beautifully lit and impeccably coiffed Muscovites will burst into full MGM song-and-dance glee on the trains, in the streets, in the tenements, in the tribunal hearings, naked in bed - and the integration of music and storytelling works a whole lot better than most of the time we Yankee pig-dogs tried the same in the movie version of RENT (ah, that's what Chris Columbus was guilty of!).

The music is outstanding, by the way. Guess Chekhov on the Enterprise was right, Russians did do everything first and better, and the Motherland dares you not to tap your feet during the "Hipster Girls' Lament" number. While I'm sure some of the detail comes accurately from a state of political repression (I like how medical X-rays were secretly etched and turned into bootleg-copy jazz LPs), there's very little feel for the serious danger facing these young dissidents, as they somehow go ahead with their clandestine recording studios, Elvis impersonations, conga rhythms...even some hip-hop beatz thrown in there somewhere. Aye, even SWING KIDS held more of a sense of peril of dreaded totalitarian jackbooted-stormtroopers finding out; here it seems the worst the Stalinist KGB will do is not be friends with you anymore.

But, in a nicely unexpected finale, we're pretty much led to believe this isn't strictly a docu-drama-with-music about what the USSR was like in the 1950s, but rather a universal statement about marginalized but proud tribal groups drawn to and defining themselves by any music that defies the rigid status quo.

And I must say, for spectacle, style, novelty and sheer fun, HIPSTERS is one of the few movies out there worth spending your dwindling roubles on. It's glorious, comrade! 3 1/2 out of 4 stars.
Posted by Charles Cassady Jr. at 12:01 AM