The Fairy (June 28th and 29th at the Cleveland Cinematheque) 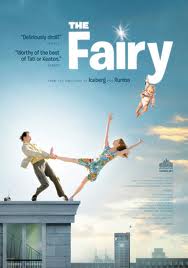 Every two months when the Cleveland Cinematheque's printed schedule (on paper! Google it, kids) comes out, I await with some trepidation program director John Ewing's sidebar essay. Ewing sometimes tells tales from behind the scenes that make it sound like running a hip indie destination movie house is not always fun. His latest describes an irate patron declaring she was done with the Cinematheque because of its showing Jean-Luc Godard's WEEK-END, one of the great transgressive features of French cinema.

Okay, here's where the Cleveland Movie Blog is partially at fault. I should have had a review of WEEK-END posted in time to warn the public, but somehow that title got past me. WEEK-END, from 1967, is a nightmarish, angry, even proto-punk take on modern civilization, in which an upscale French couple drive into the countryside for a weekend idyll, only to get caught up in an endless one-lane traffic jam, sometimes with burning vehicles and dead/dying bodies still lying around in a landscape of industrial-nihilist horror. When they leave their vehicle, the protags somehow get caught up in a kind of takeoff on Alice in Wonderland, except there's hints of kinky sex. I forget how it ends. I'm not sure Godard was much into endings at that stage. Yes, WEEK-END is not a crowd-pleaser. In fact, I can't even call myself a complete fan of it; if you're not part of the beret-wearing, gauloise-smoking leftist-intellectual crowd, pic's vibe could be summed up as the world's best bad student film. As a lot of Godard could.

So that's what we should have said. Though this lady, doubtless an east sider, has never heard of the Cleveland Movie Blog; got all her info from the Plain Dealer movie pages. The way things are going with that newspaper chain right now, the Cleveland Movie Blog may be around longer than the Plain Dealer movie pages, hehhehe... Big deal. Fat cats on the east side still won't know about us.

It's a pity this disgruntled ex-Cinematheque goer hadn't waited until now for her patronage, as the Cinematheque has another, more recent (2011) French "art film" that indeed does lighten the heart and enrich the soul (I can't much imagine Jean-Luc Godard liking it, too). It's called THE FAIRY, which hails from co-directors and performers Fiona Gordon, Domenique Abel and Bruno Romy. These folks are some kind of Franco-Belgian comedy troupe of filmmaker-comedians, who gained attention a few years ago for an almost entirely dialogue-free farce called THE ICEBERG. Now they've done THE FAIRY, which follows a similar tradition of crazy pantomime-art and slapstick that made Charlie Chaplin, Buster Keaton, Max Linder, Jacques Tati, and, aye, let's never forget Jerry Lewis. You just know that Cleveland east siders can't get enough of Jerry Lewis.

Dom (actor Domenique Abel, who looks like a Franco-Belgian Roberto Benigni) is a bored, bicycle-riding clerk at a hotel in Le Havre. One night he listlessly checks in eccentric Fiona (Fiona Gordon), a spacey woman who declares herself to be fairy, granting wishes wherever she goes. Dom, given three wishes, asks as his first for a scooter with unlimited gasoline, then romance-adventure. Fiona immediately sets about making his wishes come true - or at least Dom finds a new scooter in the office the next morning.

The rubber-limbed Fiona, it seems, is not above stealing, smuggling and freeloading in her monomania to make various wishes around town come true. Very soon Dom and Fiona are lovers, and soon they're on the lam from cops, asylum doctors and other authority figures, in a cartoon-panel landscape of sight gags, puns, deliberate artifice and oddball recurring background characters (a hard-of-hearing club DJ with his ear inches above the vinyl).

The gently absurdist-surreal narrative (as opposed to WEEK-END's aggressive absurdist-surreal one) is one more reliant on dialogue this time than the virtually silent ICEBERG. And though it drags in parts, one senses that Jacques Tati (who also could drag in parts) would approve the message. Fiona Gordon, who sort of looks like Frances McDormand, is unconventionally sexy as she is funny, and her faux-underwater dream ballet with Abel alone is likely more enchanting and fun than anything could be in the ghastly-sounding "I Dream of Genie" remake that's been on Hollywood's agenda since the 1990s (Lisa Kudrow dodged a bullet there).

So there you are, you stupid, narrow-minded bourgeois east-side-of-Cleveland plutocracy. By boycotting the Cinematheque you are missing out on one of this  city's finest... Oh, wait a minute. I just broke into John Ewing's Chamber of Secrets, just to see what he had. It was an autographed Number 23 Cavs jersey - still not defaced or burned. Never mind what I said. DEATH TO THE CINEMATHEQUE! DOWN WITH EWING! Thankyouverymuch, you've been a great audience. (3 out of 4 stars)
Posted by Charles Cassady Jr. at 1:35 PM