Detachment (June 15th and 16th at the Cleveland Cinematheque) 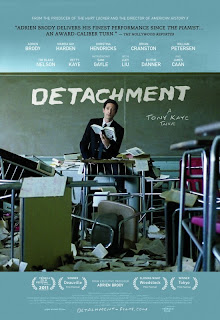 In DETACHMENT Adrien Brody plays substitute teacher Henry Barthes, a man who specializes in taking long term assignments but has no interest in finding permanent placement. His current position is teaching English at an urban high school whose principal (Marcia Gay Harden) describes it as a dumping ground for all the worst kids. What we are shown seems to bear that out, including students threatening their teachers, a girl arguing over the appropriateness of wearing clothes that display her nipples, and a boy who kills a cat with a hammer while other students watch on. There's also a quiet, overweight girl with an artistic bent (Betty Kaye) who gets made fun of at school and verbally abused at home.

That would seem to be a sufficient number of issues for any one movie, but DETACHMENT keeps piling on the pain. Barthes is also dealing with a dying, senile grandfather (Louis Zorich) who may have had inappropriate relations with Barthes' mother, leading to her suicide when he was just a boy. But wait, there's more. Barthes also takes in a teenage prostitute (Sami Gayle) he meets on his bus ride home, and despite his outward emotional coldness acts as something of a surrogate father to the girl. And then there are the other teachers, about whom we learn little else beyond their own soul crushing personal problems.

To a certain degree one expects films dealing with social issues to engage in a bit of exaggeration and simplification to make their point. That's especially true when such films take a satirical bent, like NETWORK, for example. On the other hand, if a film is going to ask its audience to take it seriously and accept that what it depicts bears some resemblance to reality, a certain degree of subtlety and restraint is called for. At least Brody seems to understand that, giving a fine, understated performance, and one can't really fault the other actors, either. Despite a stellar supporting cast that includes Tim Blake Nelson, James Caan, Lucy Lui, Blythe Danner, Christina Hendricks, and Bryan Cranston, most of these players are barely used, and to what degree they are it is to portray one-note caricatures.

Based on its sober tone and occasional use of documentary style footage, one must assume DETACHMENT is meant to be taken seriously. No doubt the problems depicted here have a basis in reality, but trying to cram all of them into one 90 minute film winds up being numbing, and at times borders on the ridiculous. The film is particularly disappointing given how well director Tony Kaye handled the even more complex and controversial issue of abortion in his documentary LAKE OF FIRE, not to mention the gripping skinhead drama AMERICAN HISTORY X which, regardless of star Edward Norton's tampering, Kaye still deserves considerable credit for. This is a long way from the level of quality of those films, though. A lot of blame for the film's shortcomings may well lie with the script, but in the end the buck stops with the director, and Kaye's self consciously artsy direction here doesn't help matters, either. 2 out of 4 stars.