The City Dark (June 8th at the Cleveland Museum of Art)

[THE CITY DARK screens Friday June 8th at 7pm at the Cleveland Museum of Art.] 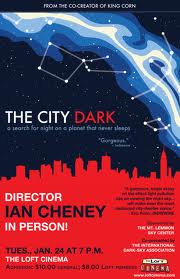 Visually arresting and even hypnotic, the film hails from director Ian Cheney, who is a New York-based photographer and amateur stargazer. In fact, one of his passions is astronomical images of incredible starfields and distant celestial vistas. He grew up under the amazing night skies in Maine, but now due to the tremendous amount of artificial light ever-beaming upwards out of Manhattan - or any urban metropolis, for that matter - Cheney can rarely see stars after sunset, let alone take their pictures.

Cheney uses that as a jumping-off point to explore the history and consequences of light pollution - the dark side of electric light, as it were. Street lights, spotlights and the general photon haze of cities, near and distant, interferes with high-sensitivity telescopes sweeping the heavens for potential "Earth killer" collision-course asteroids, of the sort dramatized in DEEP IMPACT and ARMAGEDDON. Birds, sea turtles and other wildlife are lethally misdirected by city lights. And, for the AM-radio talk-show listening hoi polloi viewers who wouldn't care if sea turtles went extinct, dig this news item: Folks working night-shift jobs, exposed to light constantly and at variance to normal biological cycles, seem to show increased cancer (somehow I think lawyers for the employers will just say that's why it's called the "graveyard shift" and the workers should have gotten the message and known what they were in for; lawsuits dismissed).

THE CITY DARK is to light pollution/overdosage what AN INCONVENIENT TRUTH was to climate change - except I liked this movie more. As much as I wasn't looking at all forward to yet another finger-wagging eco-danger scare piece, I was transfixed - like a deer in the headlights, you might say. Even on the way to the Surgeon General warning, the side details are fascinating, such as an Arizona town maintained solely for the purpose of deep-sky viewing, or a light store where original Thomas Edison bulbs are maintained (and still usable). It's an eye-opener. 3 1/2 out of 4 stars.
Posted by Charles Cassady Jr. at 12:01 AM