Attenberg (June 7th and 8th at the Cleveland Cinematheque) 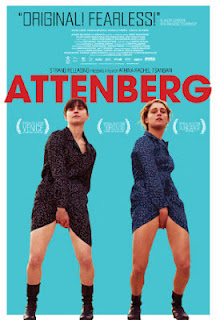 Okay, the summer-movie season scorecard so far: Bob Ignizio walked out on BATTLESHIP, proving himself a man among men. Me, I paid $9 to see CHERNOBYL DIARIES in a near-empty theater when I could have supported THE AVENGERS, MEN IN BLACK 3, WHAT TO EXPECT WHEN YOU'RE EXPECTING etc. Not that I liked CHERNOBYL DIARIES or expected to; it was just sort of my "protest vote," same as this November when I will likely write in Ron Paul, Ralph Nader, Gus Hall or Screaming Lord Sutch on my presidential ballot rather than whatever party hacks are running.

And, finally, the sequel to G.I. JOE got bumped back to a 2013 release at the very last minute. Imagine that, a movie too awful for the summer box office. Maybe the liberals that everyone says control Hollywood didn't want this one somehow blamed on Obama.

Okay, so in that Great Recession atmosphere of hopelessness, unemployment and blight, what to see this weekend? For your own "protest vote" how about spending your money seeing a weird "art film" that would leave most entertainment-industry conglomerate front-office marketers try to figure it out until their heads explode? That will show them, the bastards. And can't be much worse than CHERNOBYL DIARIES or the PIRANHA franchise.

ATTENBERG, from Greece, could well be the illustration-graphic on Wikipedia for "weird art film." Kind of a comedy, kind of a political statement, kind of a kinky sex flick from a peculiarly female POV, it's one of those pictures in which the narrative feels mostly like a bunch of disconnected scenes, shot formally at flat angles, just sort of strung together and daring a viewer to figure what is going on (with a sneaking suspicion director Athina Rachel Tangari is possibly just offscreen laughing and counting government arts-grant money). And is that a bad thing? I guess compared to another WEDDING CRASHERS imitation starring a Not Ready for Prime Time Player it's about even.

ATTENBERG takes place in a seaside Greek town. Marina is a young woman whose close relationship with her architect-father (the mother left the picture long ago, details not volunteered) has often been built on watching nature documentaries by Sir David Attenborough - hence the title, a misspelling/mispronunciation of the scientist-filmmaker's name. For this reason, one supposes, Marina is a virgin with only vague notions of dating, intimacy and how to get along with the opposite sex (okay, so what was my excuse?).

With her father slowly dying, it becomes crucial that Marina get over her fears and hang-ups over intercourse and form a stable relationship outside the household. Marina has a chic, sexy gal-pal, to whom she may have a Sapphic attraction - or it could just be that, with the detachment of an Attenborough documentary, Marina favors the female attributes of any given species over the males. Anyway, she does get a boyfriend, of sorts, but he can't perform well during their lovemaking attempts because of the heroine's verbosity and penchant for over-analysis. In the meantime, Marina makes the melancholy plans for her dad's impending death and cremation.

Final scenes seem to indicate that much of this has been about Greece's sudden evolution from an agrarian economy to an industrial one. Uh, okay. And every so often we see a duo of women sort of dancing down the cobbled squares of the town, playing word games (characters here seem to enjoy word games) and acting as a kind of, dare I say, Greek chorus? I guess for people who hate art films ATTENBERG is exhibit A, and for people who love art films (three words: Full. Female. Nudity) ATTENBERG is also exhibit A. Me, I'm just suddenly weirded out that this same Greek culture gave us WRATH OF THE TITANS. (2 out of 4 stars)
Posted by Charles Cassady Jr. at 12:01 AM