[THE ARRIVISTE is now available on home video.] 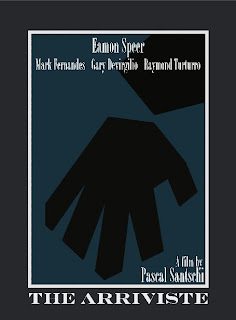 There are indie films, and then there are INDIE films. THE ARRIVISTE is about as indie as it gets, having been made for less than $10,000 by writer/director Pascal Santischi. With that kind of budget, if you wind up with anything even close to a watchable film, it counts as some kind of success. Even grading on a curve, however, it's impossible to give this film a pass.

Rather than the moronic horror schlock one usually finds in the micro budget world, Santischi's film is a crime thriller with ambitions of telling a complex and twisty tale of murder, blackmail, and deceit. Such ambition is laudable, but in execution the plot is an incoherent mess and the acting is mostly wooden, with the few performers who opt to go over the top at least giving the film a little life.

The overall feel of THE ARRIVISTE like some grindhouse picture from the sixties or seventies, only minus the exploitation elements. The film occupies a curious position where it's not good enough to fully realize its ambitions, but neither is it awful enough to be entertaining as camp. As a result, it's a tough slog to get through.

I've put off writing this review for a while, as I really don't relish tearing into films like this. Santischi obviously felt passionate about making this movie, and given the limitations he had to work with, he did the best he could. But while I can respect the effort, I also have to review this film with the potential viewer in mind, and unless you're a hardened veteran of the micro budget film scene, there's little chance you'll make it past the first 15 minutes. For more information and/or to order a copy of the film, go to http://www.thearriviste.com/movie/thearriviste.html 1 out of 4 stars.
Posted by Bob Ignizio at 12:01 AM