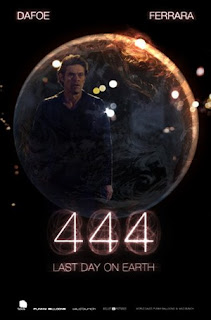 In director Abel Ferrara's apocalyptic 4:44 LAST DAY ON EARTH, not only is the world ending, but we have to spend humanity's final moments with pretentious New York artist types. It seems Al Gore was more or less right, as global warming takes its final toll on the planet. Oddly, the end of the world is nice enough to wreak its havoc on a precise schedule, seemingly producing no serious ill effects until 4:44 am on the night the film takes place on.

One would think there might be some discomfort and chaos leading up to that moment, but not in Ferrara's film. However, as artist and recovering heroin addict Cisco (Willem DaFoe) walks around on his roof, we see New York traffic zip along the streets in an orderly manner. We do witness a suicide, and the TV, perpetually on in the loft Cisco shares with his painter girlfriend Skye (Shannen Leigh), tells us the end is nigh, but overall people seem to have accepted the inevitable a lot better than one might expect.

DaFoe is excellent as always, creating a believable character who feels fully fleshed even if he isn't necessarily written that way. That's all well and good, but all of DaFoe's talent doesn't change the fact that there's not much to this film. Cisco and Skye have sex and talk to a few old friends and family members on Skype, and at one point have a spat over one such conversation Cisco has with his daughter and an ex. It's all well acted and technically well done, but too emotionally distant to invest in, and the way the characters deal with their impending doom is neither believable nor particularly interesting.

With so many filmmakers of late offering their takes on the end of the world, you have a wide range of Apocalypses to choose from. Lar's Von Trier's beautiful and morose MELANCHOLIA, the more comedic and human SEEKING A FRIEND FOR THE END OF THE WORLD, the snarky supernatural Armageddon of CABIN IN THE WOODS, and of course any number of zombie and alien onslaughts. And that's just in the last 12 months. With that in mind, 4:44 LAST DAY ON EARTH just doesn't offer enough of a unique and compelling take on the subject to warrant taking yet another cinematic trip into oblivion. 2 out of 4 stars.
Posted by Bob Ignizio at 12:01 AM