What to Expect When You're Expecting 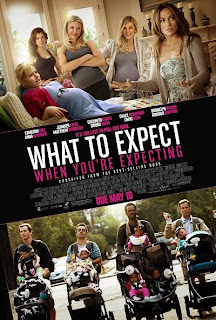 Even if you've never had a baby yourself, chances are you're aware of What to Expect When You're Expecting. You can't even go to a garage sale without stumbling across a used copy, so ubiquitous is Heidi Murkoff's best-selling book for expectant parents. Of course there's not really a plot, this being a self-help book, but with brand recognition like that, Hollywood figured they'd turn it into a movie, anyway. Hey, it worked for Woody Allen when he made EVERYTHING YOU ALWAYS WANTED TO KNOW ABOUT SEX (BUT WERE AFRAID TO ASK). Who's to say that director Kirk Jones and his cast and crew can't succeed, too?

Although nowhere close to being on the same level as Allen's film, WHAT TO EXPECT WHEN YOU'RE EXPECTING does deliver a few laughs, even some big ones. The majority of those come from a group of dads marginally led by Chris Rock who, along with their babies, hang out together in the park. There they can speak freely about the ups and downs of parenting without fear of judgment or having anything they say get back to their wives. I didn't quite get the weird bromance thing these guys had going on with uber jock Davis (Joe Manganiello), but otherwise this was the most relatable and funny part of the film. Unfortunately it accounts for only about 20 minutes of WHAT TO EXPECT's nearly two hour running time.

Now, it's understood that Hollywood is all about selling fantasy, but is it really too much to ask from a movie that follows 5 different couples on their pregnancy journeys that at least one of them be average, working class folks? The closest WHAT TO EXPECT WHEN YOU'RE EXPECTING comes to that are the young hipsters Marco (Chace Crawford) and Rose (Anna Kendrick) who both own their own food trucks, and for reasons that will be obvious if you see the film, get less screen time than the other couples.

Aside from the hipsters, we're given middle aged fitness guru and reality show star Jules (Cameron Diaz) who gets knocked up by Evan (Matthew Morrison), her partner on a “Dancing With the Stars” type program; professional photographer Holly (Jennifer Lopez) and her husband Alex (Rodrigo Santoro) who are trying to adopt an Ethiopian baby; author of a children's book on breast feeding Wendy (Elizabeth Banks) who had just about given up on getting pregnant with her husband Gary (Ben Falcone), a former contestant on Diaz' weight loss show; and Gary's dad Ramsey (Dennis Quaid), a Nascar champion married to the much younger Skyler (Brooklyn Decker) who just happens to be the cousin of Rosie. So as you can see, on top of the fact that it's difficult to relate to any of these characters, the movie also felt the need to contrive a way for them all to be connected.

It's to the film's credit that it shows several different outcomes to these pregnancies, including one that ends in miscarriage. At least in that respect, I think couples who have gone through the rollercoaster ride of bringing a new life into the world can relate to the film. However, those same couples surely know from their own experiences just how much real humor and real difficulty there is to be found in pregnancy and childbirth. WHAT TO EXPECT has some moments that touch on that kind of authentic humor, but for the most part it sticks to generic Hollywood comedy hijinks and easily solved, sitcom-level dilemmas. For every moment that feels real, there are two or three on the level of the ludicrous golf cart chase between Quaid and Falcone's characters. It's not bad, but it feels like an opportunity was missed. 2 1/2 out of 4 stars.
Posted by Bob Ignizio at 12:01 AM