Tomboy (May 11th and 12th at the Cleveland Cinematheque) 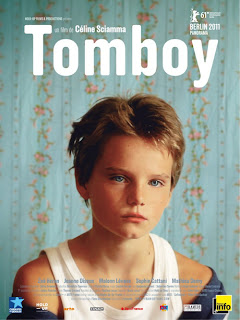 It's hard enough on a kid to move to a new town and deal with trying to fit in and make friends. On top of that, Laure (Zoé Héran) is struggling to figure out exactly who she is and how to be that person. An androgynous ten year old girl, in TOMBOY she takes the opportunity provided by her fresh start to create a new identity, that of a boy named Mikael. The ruse works well enough over the summer, but what will happen when school starts and Mikael has to go back to being Laure?

The scenes of Laure with her family, who are loving and accepting, have a genuine warmth that one rarely sees in the movies. The other kids Laure/Mikael plays with feel real, too, neither perfect angels nor cruel to the point of caricature the way we might expect in a similarly themed Hollywood film. There is no attempt to turn Laure's quest for self acceptance and understanding into a tragedy in which she must pay an awful price for simply being who she is ala BOYS DON'T CRY. Movies like that are important, to be sure, but isn't a film in which being different, while not without its problems, doesn't have to end badly just as important?

Writer/director Céline Sciamma presents all of this in a completely naturalistic, matter of fact way. Like the films of the Dardene brothers, whose recent THE KID WITH A BIKE also dealt with adolescence in a frank and believable manner, TOMBOY goes for an almost documentary feel. There is no music on the soundtrack aside from a song Laure/Mikael listens to with his/her best friend Lisa (Jeanne Disson), and at no point does it feel like anyone in the film is acting; this could almost be an exceptionally well shot and edited home movie.

Although it certainly does deal with gender issues, it bears mentioning that at no time does TOMBOY express an explicit “gay agenda”. Laure is like most kids her age, simply trying to figure out how to be herself. No doubt the film will speak particularly to the LGBT community, but this is a film that anyone who ever felt awkward or confused as a kid can relate to, and hopefully come away from feeling a little better about themselves. 4 out of 4 stars.