[SOUND OF MY VOICE opens in Cleveland on Friday May 25th exclusively at the Cedar Lee Theatre.] 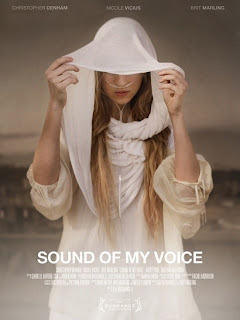 Brit Marling, the willowy blond economics graduate who turned down a career at Goldman Sachs to become an actress, is the co-writer and star of SOUND OF MY VOICE, an absorbing low-budget thriller about a cult leader (played by Marling) who claims that she comes from the future. Marling taught herself to write because she reasoned it was the only way she could get good roles. She previously wrote and starred in the well regarded 2011 sci-fi drama ANOTHER EARTH.

SOUND OF MY VOICE was originally conceived as a ten-part webisode, and for that reason, there remain a few loose plot threads. Nonetheless, it is a tense, suspenseful drama with a tantalizingly ambiguous story, atmospheric cinematography by Rachel Morrison and haunting music by indie rocker Rostam Batmaglij (the brother of the film's director and co-writer, Zal Batmaglij).

The story centers on Peter (Christopher Denham), a young, bespectacled L.A. schoolteacher who sets out to make a documentary film exposing the cult leader Maggie, who says she was born in the year 2030 and has wisdom to impart to her followers – “the chosen ones” – who meet in an unfurnished basement in the Valley. The film opens as Peter and his girlfriend, Lorna (Nicole Vicius), a former Hollywood wild child, posing as cult initiates, are led blindfolded to the secret basement. Maggie emerges, dressed in a white sheet and with an oxygen cannula in her nose – the contemporary atmosphere is poisonous to her future-born system, her followers explain — to tell her story. She says she woke up one day underwater, in a bathtub, and could not remember anything about her life. After wandering the streets, aimless and sick, she came to recognize that she had a special mission. She has traveled back in time, she says, “to save the people I love.” Peter believes Maggie is a fraud — a dangerous fraud capable of leading her followers to something, maybe mass suicide.

The film creates a prickly sense of foreboding, as Peter and Lorna's mission grows more dangerous. Maggie's methods at first include such benign New Agey things as guided meditations and improvisational dance, along with vague bits of spiritual “wisdom” like “Things come together and they fall apart.” Sometimes her recollections seem clearly faked, but when a member questions her veracity, he is quickly ejected from the group.

Things quickly become more sinister. Maggie's rituals descend into forced group vomiting, which she describes as a means of “purifying yourself, preparing to receive your destiny.” Maggie, whose time-traveling claims are questionable but who has a great instinct for self-preservation, zeroes in on the doubtful-looking Peter. She calls him an “anal-retentive prick” and wrests from him tearful memories — faked, he later claims — of childhood abuse. There are hints of greater danger to come: Lorna is led to a remote shooting range, Maggie enlists Peter to perform an unsavory task. The couple's relationship frays as one of them starts to fall under Maggie's enchantment.

The film falters a little in portraying Maggie's supposed mesmeric quality, because Marling is clearly a better writer than actress. Her cult leader is vague and affectless, not powerful and charismatic enough to inspire followers to give over their lives to her. The other lead performances are quite good, and the screenplay is particularly well observed. I liked a scene in which Peter and Lorna discuss whether to proceed with the documentary in spite of the danger. Peter argues that they need to make the film to justify their lives, which otherwise represent the aimless drifting of young creative dilettantes. Instead of making the documentary, he says, “I could just teach all day, and you can stay home and write and surf the Web, and on weekends, we can get wasted at various art installations and random foreign films.” Aside from the getting wasted part, he has just about described my life.

The story's ambiguity, reminiscent of that of another recent indie thriller, TAKE SHELTER, could be frustrating to some viewers, but I think it makes the the film all the more interesting. 3 out of 4 stars.