Shelter (May 19th at the Ohio Independent Film Festival)

[SHELTER screens Saturday May 19th at 9:00 pm at the Ohio Independent Film Festival.] 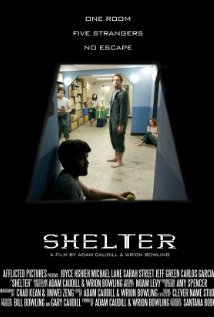 Five people who barely know each other find themselves locked in a bomb shelter after what appears to be an apocalyptic event takes place. The shelter is reasonably well stocked, but the question isn't so much whether the survivors will run out of food as it is whether they will run out of patience with each other. SHELTER jumps back and forth in time, we know fairly early on that something has happened to at least one of the five survivors since they aren't present in any of the later scenes, but the film draws out the mystery of exactly what took place almost to the end.

Despite being a micro budget production, there's no need to grade SHELTER on a curve. The writing and directing team of Adam Caudill and Wrion Bowling have crafted a taut little thriller here that feels like an episode of The Twilight Zone that's been stretched out to feature length without feeling padded. Like even the best TZ episodes, SHELTER is a bit contrived at times, and perhaps a bit too reliant on plot twists, but that's not to say the film isn't entertaining, and even thought provoking at times.

The cast (Joyce Hshieh, Michael Lane, Sarah Street, Jeffrey Green, and Carlos Garcia) is surprisingly good for a movie of this budgetary level, with Lane in particular standing out as someone with a real shot at bigger things. But really, no one embarrasses themselves here; there's maybe one or two awkward line readings, but that's about it. And while Caudill and Bowling may not wow anyone with their style, neither is their film visually bland, despite being confined to just one location.

This being the Cleveland Movie Blog, I'd be remiss if I didn't mention that SHELTER was shot in Akron, Ohio, where Bowling is originally from. Not that you can tell since one basement looks about like any other, but it's still nice to see the Rubber City represent. 3 out of 4 stars.
Posted by Bob Ignizio at 12:01 AM