[MY NAME WAS SABINA SPIELREIN screens Thursday June 14th at 5:45 pm and Friday June 15th at 7:30 pm at the Cleveland Cinematheque.] 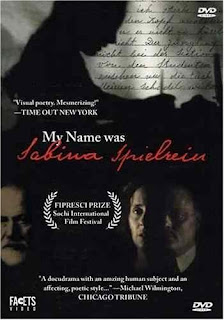 The documentary MY NAME WAS SABINA SPIELREIN could be seen as the antidote to A DANGEROUS METHOD, the talky and surprisingly dull David Cronenberg film about the relationship between psychoanalysis pioneer Carl Gustav Jung and Sabina Spielrein, the young Russian-Jewish woman who was his analysand and later, his lover. The documentary, directed by Elisabeth Martón, tells the same story but from Spielrein's point of view, based on a trove of Spielrein's papers — diaries, letters, drawings and other writings — discovered in 1977 in the cellar of the former Institute of Psychology in Geneva, Switzerland.

The film skillfully weaves a narrative from Spielrein's writings with photographs and reenactments of events. Spielrein was the 18-year-old daughter of physicians when she came to the Burgholzi clinic in Zurich, where her analyst was the 29-year-old Jung. Spielrein, Jung's first patient, had developed a complex of unusual symptoms, supposedly based on seeing her overbearing father beat her brothers, which aroused her sexually. She was diagnosed with hysteria, the standard diagnosis of the day for women. Alongside her rather dramatic symptoms, which included repeated histrionic suicide attempts, Spielrein had an impressive intellect and an ambition to become a doctor. She quickly moved from patient to doctor's assistant, and was discharged from the clinic after ten months to attend medical school at the University of Zurich, where she excelled despite obstacles based on her sex. “Stupid that I am not a man!” she writes in her diary. “Everything is easier for them.” Over the years, she continued to correspond with Jung, and fell deeply and obsessively in love with him.

Cronenberg's film reveled in kink by depicting Jung beating Sabina to noisy orgasm while she is a patient at the clinic. It's unclear whether doctor and patient had a sexual relationship during her stay at the clinic — it has been claimed that they did — but the documentary suggests that a more conventional affair developed in the years after her discharge. She wrote Jung long, fervent letters about her feelings, and at some point, perhaps at the provocation of the libertine morphine addict and psychoanalyst Otto Gross, he decided to reciprocate. The resulting affair ended bitterly. Spielrein later wrote that Jung stole her ideas on the “death instinct” for his own paper (calling him “not my friend but a petty, sly rival”) and toyed with her affections, “preaching polygamy” while staying with his proper Swiss wife and children. Spielrein wrote letters to Freud asking him to intercede. Freud, unaware of the affair, responded with courtly concern.

Matters of sexuality, beginning with the Spielrein affair and including what Jung considered Freud's excessively sex-based theories, were the source of the later break between Jung and Freud. As depicted in Cronenberg's movie, the Spielrein affair was the subject of extensive correspondence between the two doctors. Jung concealed the true nature of his relationship with Sabina, painting her as a hysteric who had formed an irrational attachment to him. The two male analysis avatars came up with the theory of “counter-transference” to explain the phenomenon. Freud wrote to Jung: “The way these women charm us with every possible psychic device...is one of nature's greatest spectacles.” Professional ethics were not a concern. Clearly there was a need for a feminist voice in the cigar-smoky corridors of psychoanalysis. Spielrein, whose contributions to the field have been sadly overlooked, pioneered a feminine theory of schizophrenia. She was also an early practitioner of child psychology.

It's interesting to note that lying about sex was as popular then as it is now. Strangely, in his autobiography, Dreams, Memories, Reflections, Jung portrays himself as the soul of rectitude, criticizing Freud for being disingenuous about his own long-term affair with his wife's sister.

Freud was determined to give psychoanalysis a medical-scientific legitimacy, but today it is better understood in literary terms peculiar to the Victorian era – sexual obsession and its repression. Spielrein's overheated passion for Jung, as well as her psychoanalytic theories, echo the “Liebestod,” or “love death” theme of Wagner's Tristan und Isolde. In her florid letters and diaries, she agonized over the married doctor, wanting desperately to bear him a child, which she gave the Wagnerian name “Siegfried.” Destruction and death, never far from Europeans' doors during World War I, burst into her theories: “Destruction is a cause of coming into being,” she wrote.

Cronenberg's film lingered voyeuristically on Spielrein's orgasmic grunts and grimaces. The documentary, while more sober, gets tangled for a long while in Spielrein's romantic writhings. As it happens, her affair with Jung may be the least interesting thing about her life. The film's moving account of Spielrein's later years, which included a return Russia, an unhappy marriage and persecution by Stalin and by the Nazis, illustrates the triviality of Wagnerian romantic passion when compared to events in the real world. Spielrein was lured back to Russia by the promise of bringing psychoanalysis to her homeland, where she established a famous kindergarten. It was closed by Stalin's regime three years later, and Spielrein, whose physician husband was killed in Stalin's Great Purge, struggled to support herself and her children. According to the film, Spielrein trusted the Germans, refusing to flee Russia after the Nazis invaded. Her decision proved fatal; she and her children were among 27,000 people executed by the Nazis in 1941. 3 1/2 out of 4 stars.