[Murgi Keno Mutant screens Sunday May 20th at 1 pm as part of a program of shorts at the Ohio Independent Film Festival.] 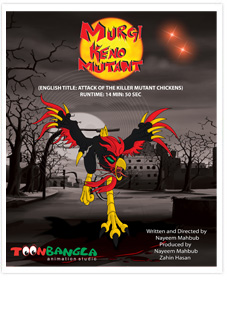 Okay, if you’ve gone over the 2012 Ohio Independent Film Festival program by now you are probably thinking that MURGO KENO MUTANT ("Attack of the Killer Mutant Chickens") is some sort of prank announcment; a Bangladeshi short about martial-arts chefs battling a flock of deadly chickens ravaging the future . What is this thing? First of all, for those of you unfamiliar with world geography (those whose map of the world probably just shows a large “DOWNTOWN CLEVELAND CASINO” landmass and not much else), is a small, rather impoverished country adjacent to . No, the is not at war with them as yet.

I think MURGO KENO MUTANT might be the first piece of Bangladeshi cinema I’ve ever beheld, and while it is probably not representative, all I can say is...wow!

First, know that it is a cartoon. Simple-but-slick animation – not live action. Sorry if you were expecting, I dunno, a Punjabi/Hindi-language version of the Troma gore-comedy POULTRYGEIST. Filmmaker Nayeem Mahbub and company render the material in a neat, CGI-assisted echo of the “Filmation” type Saturday TV action-adventure cartoons of yesteryear (you can tell how I wasted my youth instead of learning junior auto repair or something maketable, dammit).

Setting is indeed a under siege from chickens. The popular food fowls have turned rogue and now hunt humans. Even so, people still enjoy their chicken kebabs and capons, so a super-hero-ish trio of chefs at a greasy spoon occasionally go after the angry birds with heavy weapons and kung-fu skills. After one big chicken firefight a lone surviving rooster happens to get irradiated by a meteorite. He becames a giant ALIEN-PREDATOR level super-chicken, mates with a hen (a very funny “Bollywood” musical interlude) and raises an army of man-sized chicken warriors to take revenge on the super-chefs. But it’s okay, as the humans observe that bigger chickens, even mutant killer ones, translate into more meat for their customers.

You’re probably wondering if this is shrill animal-rights propaganda. While I’ won’t dissuade anyone from going vegetarian, I’m actually given to understand the filmmakers did this as a comical response to the bird-flu scare, as big in Bangladesh as in anywhere else. So it’s just a lark, of as much import as that running giant-chicken fistfight that’s become a recurring gag on “Family Guy.” But Nayeem Mahbub’s film is a funny one, and one quarter-of-an-hour not soon forgotten. (3 out of 4 stars)