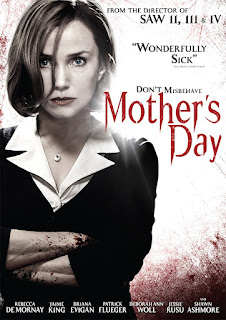 I'm sorry, I really should have posted this review in time for Mother's Day, as that was the synergistic video-release street date for the splatter-horror-remake-reboot-whatever MOTHER' DAY. Guess I make a lousy critic, or even more so, a lousy mother. At least I used to console myself that I was a competent craphound-movie historian - yet there is a blank spot in my mind (lucky me) regarding the original 1980 MOTHER'S DAY, on which this slicker, bigger-budgeted remake (produced by...Brett Rattner?!) is based.

I have dim memories of seeing parts of the original MOTHER'S DAY, even interviews with some of the actors - maybe in some kind of TV-news piece about cinematic violence and slasher-horror trends. But I am given to understand that, even with cameos by the initial MD talent somewhere in there, this really has no resemblance to the first MOTHER'S DAY. Sorry.

The new film is sort of a gory, modern takeoff on the whole Ma Barker/criminal matriarch thingie. Onetime ingenue Rebecca De Mornay, since she can no longer pretend to be 23 (yet she looks great, more so than she did as a sunbleached, working-class mom in LORDS OF DOGTOWN) follows in the thespian footsteps of Bette Davis and Shelley Winters in essaying monstrous mid-life female villainy. She's Mrs. Koffin (hardy har har), ringleader of a homicidal clan of robbers. No father is present.

After her savage adult sons violently bungle an Omaha bank raid they flee, with one badly wounded, to the formerly empty Koffin family home in the suburbs. But guess what? The house was just bought by an upscale Realtor couple in a quickie foreclosure. Thus it's got a housewarming party of affluent types happening on the night - a dark-and-stormy night, no less - when Mrs. Koffin visits to take charge of her unruly sons taking everyone hostage.

At first she is all PTA-mom apologetic for her offspring's bad manners. But Mrs. K turns into a steely sadist when she grows to suspect that one of the captives intercepted the stolen cash she'd been mailing regularly to hold onto the homestead. While one boy goes off to arrange a arranging a getaway (an exercise which turns into bloody mess), Mrs. Koffin presides over psychological manipulation, moralistic judgments and mutilation-punishment, unmasking the hostages own greed and hidden treacheries towards each other. There's burning, there's scalping, there's shooting, there's bludgeoning - and there's a sequel-ready ending, if you had any doubts.

This hails from  Darren Lynn Bousman, one of the SAW sequel directors. And just as SAW followups tried desperately to remain socially "relevant" by referencing topics like the mortgage crisis, this torture porn endeavors to convince us that however bad the killers are, their victims, seemingly random at first, ultimately deserve what they get, sorta, for being sneaky, duplicitous, adulterous and generally Wall Street MBA-like. Sorry, no matter how much I might "get it," I couldn't find much to enjoy about the grim butchery - and with it camethe depressing realization that Mrs. Koffin is actually one of the better roles to come Ms. De Mornay's way. She sure inhabits the part, with a prim Maggie Thatcher wardrobe ensemble, Sarah Palin sermonizing and tiger-mom-with-a-chainsaw attitude. But whatever dark humor is supposed to be there didn't endear the film to me. I'd like to say MOTHER'S DAY is a movie only a mother could love, but maybe the gore dweebs will take that as a compliment.

No, I don't much look forward to where the bottom-of-the-barrel scrapers go next in their search for 80s horror to make over, or what memories of my misspent viewing youth they may (or may not) conjure in the process. (1 1/2 out of 4 stars)