[MIGHTY FINE opens in Cleveland on Friday May 25th exclusively at the Cedar Lee Theatre.] 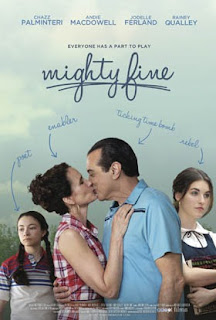 It's the seventies, and Fine family patriarch Joe (Chazz Palminteri) has done well enough in the fabric business that he feels comfortable uprooting his family from Brooklyn to move into a spacious new home in Louisiana. He buys the house outright and has it put in his wife Stella's (Andie MacDowell) name, ostensibly as a gift. There are other reasons, but we don't learn these just yet. Older daughter Maddie (Rainey Qualley) is a bit miffed that no one consulted her about the move, but at least her younger sister Natalie (Jodelle Ferland) seems hopeful.

On the surface, things look pretty good for the Fine family. You might even go so far as to say they're MIGHTY FINE, to quote the title of the film. The same description could also apply to Joe himself, with “mighty” in this case describing the way Joe sees himself as a strong man capable of taking care of his family and employees. All is not well, however, thanks to a combination of Joe's bad business decisions and anger management issues. Ah, the title is ironic. Get it? Yes, we get it.

That MIGHTY FINE engages in such hamfisted wordplay is just one of its problems. Based to some degree on writer/director Debbie Goodstein's own family experiences and those of friends and contemporaries with similarly angry fathers, MIGHTY FINE is at its best when dealing head on with what it's like to be the wife or daughter of a man who can be wonderful and loving one minute and go flying off on a rage the next. Unfortunately, Goodstein feels the need to constantly juice up the drama with contrived subplots like Joe borrowing money from the mob. Other aspects feel equally phony, like Natalie's efforts to win a Campbell's Soup poetry contest.

The best thing MIGHTY FINE has going for it are its actors, especially Palminteri. It would have been really easy to take this character over the top, but Palminteri finds just the right level of anger. He's not an evil person, just a guy with some serious problems whose pride won't allow him to seek help. MacDowell is excellent as well, managing to effectively portray a character who isn't quite strong enough to do the right thing, but isn't entirely a victim, either. Qualley (MacDowell's real life daughter) and Ferland are believable teens, but to a large degree are kept in the background even though the story is being told by the adult Natalie (voiced by Sally Winters) via flashback.

Also of note is the look of the film. Cinematographer Bobby Bukowski shoots MIGHTY FINE using a color pallette reminiscent of a faded Polaroid, and the seventies fashions are appropriately tacky without crossing the line into unintentional parody.

Despite its issues MIGHTY FINE feels sincere, and as previously noted does manage to hit its mark on occasion. It's not nearly enough to make for a good film, though. Just enough to show that the potential for a good film was there. 2 out of 4 stars.