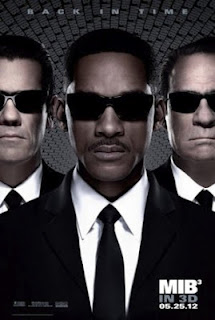 In that film, Agent K (Jones) groomed J (Smith) for a career with Men in Black—a clandestine government agency tasked with policing extraterrestrial life on Earth and concealing knowledge of said aliens from humans (Think I.N.S. for E.T).  The new partners tested each other’s nerves while hunting a giant space cockroach (Vincent D’Onofrio).  J returned the favor in 2002’s MEN IN BLACK II, plucking mentor K from retirement to save Earth from a shape-shifting Kylothian queen (Lara Flynn Boyle).

Now, a decade after the events in MIB II (and fifteen years after J’s enlistment), MEN IN BLACK III has our favorite sci-fi G-men on the heels of a new cosmic crook, Boris the Animal (Jemaine Clement), who escapes from the moon’s Lunar Max prison during the prologue.

Remember the chattering Cenobite from the HELLRAISER series?  Give him Randy “Macho Man” Savage’s mullet, Tommy Chong’s beard, and binocular lenses for eyes, and you’ll get Boris.  The gnarly villain also has molars for incisors, shoots spikes from his palm like an X-MEN mutant nasty, and is a parkour expert.  A formiddable skill set.  Boris has spent forty years in confinement plotting revenge on Agent K, who in 1969 thwarted his plans to prep Earth for a close encounters of the hostile kind.  K’s meddling also cost Boris an arm, and apparently his species aren’t into the whole forgive-and-forget thing.  So Boris makes like Biff Tannen in BACK TO THE FUTURE PART II and travels into the past to undo K’s efforts, thereby ensuring his people’s successful colonization of Earth in 2012.  Hello, Mayan apocalypse!

J gets hip to the scheme when K abruptly vanishes from the present day.  Everyone else in this newly-created reality—including J’s old flame, Agent O (Emma Thompson)—thinks K died on the job back when Nixon was president.   So J must track Boris from alter-2012 to 1969 to help K—and save humanity—without becoming too involved with his partner’s younger self (Josh Brolin), lest he create one of the paradoxes seen in a dozen other time-travel adventures.  Assisting him is a fifth-dimensional being who can perceive all possible outcomes of every moment along the space-time continuum at once.  The goofily-dressed (perhaps named for the adversary in BACK TO THE FUTURE PART II), bears an uncanny resemblance to Elijah Wood (it’s Michael Stuhlbarg).

Notable sequences and set pieces include a Mexican standoff in a Chinese eatery, a party-crashing at a “happening” thrown by Andy Warhol, and a climactic chase / fight at , where the crew of Apollo 11 await launch for their historic moonwalk.  MIB III also features ’s Wonder Wheel, in the iconic amusement park ride’s best movie appearance since 1979’s THE WARRIORS.

The popular worms seen in prior MIB entries appear here only in passing.  The likeness of Frank the Pug graces a large photograph and circus poster, but the talking dog doesn’t turn up.  The most glaring absence is that of Tony Shalhoub’s head-sprouting pawnshop proprietor, Jeebs.

But hey, that’s SLEDGEHAMMER’s David Rasche as head of MIB in 1969.

The script isn’t as smart as writers Etan Cohen, David Koepp, and Jeff Nathanson might think.  Sure, MIB III toys with the conundrums intrinsic to temporally-affected actioners (TIMECOP, STAR TREK IV, TERMINATOR, etc.) milking several what-if moments for desired effect and bouncing them off MIB’s now-familiar ray gun technology (the penlight neuralyzers used to wipe the memories of witnesses are lambasted).  The screenplay is more successful spelunking Sixties’ hippie culture and racial tension: Agent J hesitantly salutes a Black Panther and berates a pair of dumb-and-dumber traffic cops for profiling him, only to have his civics lesson back-fire.  But the clever, lump-in-the-throat denouement ties the series up nicely.  With a big black bow.

Parents, be advised: This splatter-fest earns its PG-13 rating courtesy several gooey monster (and human) deaths, one yucky alien make-out scene, and a couple S-word utterances.  2 ½ out of 4 stars.
Posted by Peter M. Roche at 12:01 AM