[LOUDER THAN LOVE: THE GRANDE BALLROOM STORY screens Wednesday May 16th at 7 pm at the Foster Theater in the Rock & Roll Hall of Fame and Museum. The screening is sold out.] 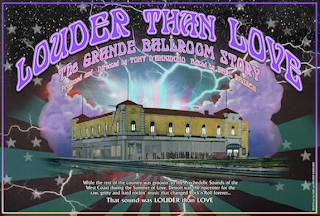 Russ Gibb was about as unlikely a rock impressario as one could imagine. A schoolteacher by trade, he realized he could make more money putting on dances for area teens, many of whom at the time (the mid sixties) lived in communities where music and dancing were outlawed. After seeing what was going on out west at Bill Graham's Fillmore, Gibb decided to create a similar venue in Detroit. To that end, in 1966 he acquired the Grande, a dancehall built in the twenties by architect Charles N. Agree that boasted a huge hardwood dance floor. The style of music that the Grande would become most associated with was a far cry from the peace and love psychedelic rock that graced the stage of The Fillmore, though.

Although the Grande booked all kinds of music – blues legends like B.B. King, jazz acts like Sun Ra , and then up and coming rock acts like The Who, Pink Floyd, and Fleetwood Mac (all on the same bill, as one flier attests) – it was as a home for homegrown acts like the MC5, Alice Cooper, and The Stooges that The Grande earned its claim to fame. These were bands who would help lay the foundation for heavy metal and punk rock, and they weren’t interested in beads and flowers and all that hippie nonsense. That more aggressive approach to rock n roll is implicit in the title of Tony D’Annunzio's documentary on the Grande, LOUDER THAN LOVE: THE GRANDE BALLROOM STORY. These were the bands that, as Alice Cooper once put it, “drove a stake through the heart of the love generation.”

To tell the story of this iconic concert hall, D'Annunzio has assembled most of the major players who worked or played there, and even some of the folks who used to attend shows there, to share their memories. Alice Cooper, Ted Nugent (whose Amboy Dukes were another popular Detroit band), the surviving members of the MC5, Grand Funk Railroad's Mark Farner, The Who's Roger Daltrey, and Stooges guitar player James Williamson are among the famous rockers singing the Grande's praises on camera. Notable for their absence are Stooges frontman Iggy Pop, and one of the biggest stars to come out of the Detroit music scene of that era, Bob Seger, whose early bands were much more hard rocking than the music that ultimately got him on the charts.

The main problem I had with LOUDER THAN LOVE is that it assumes a certain degree of familiarity with the music that came out of the Detroit music scene of the late sixties. It's not a problem for me; I'm a fan of many of these groups. Not everyone knows who the MC5 or The Stooges are, though, or what they sound like and why they matter when they didn't really sell all that many records. Also, with its aging interview subjects all coming across as very serious and reserved (with the exception of noted Republican nitwit Nugent), the film could have used a bit more of the energy and urgency of the scene it documents. More vintage footage of the bands that helped put the Grande on the map would not only have livened things up, it would have given those who aren't familiar with these bands an idea what all the fuss is about. Perhaps music rights issues were a problem, but regardless of the reason it does keep the film from being more appealing and accessible to those who aren't hardcore music geeks. 3 out of 4 stars.
Posted by Bob Ignizio at 12:01 AM