An interview with Anne Renton, director of 'The Perfect Family' 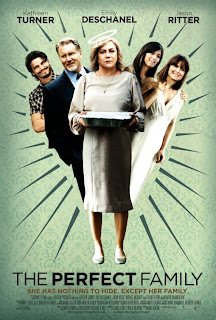 Director Anne Renton didn't set out to be a filmmaker. In fact, she earned a degree in Physiotherapy. While traveling the world studying healing, Anne also found herself becoming increasingly involved in film as an actor and voice-over artist. Eventually Anne's work in film led to her trying her hand at directing. Her first feature is THE PERFECT FAMILY, which opens in Cleveland this Friday May 11 th exclusively at the Cedar Lee Theatre. I recently had a chance to ask Anne some questions via email, and here's what she had to say.

CLEVELAND MOVIE BLOG: You started out on a very different path, having earned a degree in Physiotherapy. How did you wind up getting into filmmaking, and does your background in healing play a role in the film work you do?
ANNE RENTON: When I studied healing we learned all about energy blocks and how they are held in the body. Since creativity is such an important way to help energy flow and free blocks, I decided to pursue a creative passion of my own: acting. I started taking classes and learning the craft, falling more in love with it all the time. That combined with the healing studies I was also doing in psychotherapy really propelled me into wanting to learn about character development and understand how one’s life experiences integrate into one’s personality traits. I did a bit of work in independent film and voice-overs as an actor. However it was clear to me that ultimately I wanted to tell stories and direct. When I moved to Los Angeles several years ago, I studied the technical side of filmmaking. Because my healing background is a part of how I choose to live in the world, I feel I was able to bring a sense of grounded presence and calm to the set. I feel it is imperative for actors to have a safe, unobtrusive space to work in and the set on this film provided that. In terms of stories I tell, I am interested in how people undergo some kind of personal transformation throughout the story.

CMB: What films or filmmakers influenced and/or inspired you?
AR: I really like Mike Leigh and Alexander Payne as filmmakers. Although they have different styles, they both present beautifully flawed characters in a way that we can relate to, enabling us to totally immerse ourselves in their journey. I also love Niki Caro’s Whale Rider. Niki’s ability to craft such an excellent story/film with a female protagonist who goes through a strong transformational arc is so admirable, especially considering it was her first feature.

CMB: How did you find the script for THE PERFECT FAMILY, and what about it appealed to you?
AR: I initially found the script on a site called Ink Tip- an online website where writers can post their material for producers and agents, etc. When I read the script I really enjoyed the characters and the relationships, and felt it was a very relatable story.

CMB: You mention in the press materials I got on the film that making THE PERFECT FAMILY was very much a collaborative effort. To what degree did that collaboration change what was on the page and what you as the director had in mind?
AR: Early on in the process Kathleen Turner gave us s script notes that helped give further dimension to her character. Her notes were brilliant and definitely aligned with the intention for the script, and very much enhanced what we were going for. I think in general the collaboration with everyone involved in the project supported what I had in mind to come together in a way that was stronger and clearer.

CMB: For a first feature, you assembled a pretty remarkable cast of well known performers. How were you able to get so many well known actors on board?
AR: It started by getting Kathleen on board the project. Our casting director Ronnie Yeskel had a relationship with Kathleen’s agent and got the script to him. As I said earlier, Kathleen gave us some wonderful notes that included specific things she needed to see in the script in order for her to say ‘yes”. So, we did a rewrite specifically for her. Once she was on board, things certainly came together. Our producers Jennifer Dubin and Cora Olson had worked with Jason Ritter before and also connections to Emily Deschanel. Then our casting director brought several amazing actors in to meetings and/or audition. I think the actors authentically responded to the material. And of course having Kathleen attached was a huge draw as well!

CMB: Are there elements of the story in THE PERFECT FAMILY that mirror your own life?
AR: I think many people, as they grow up, go though the experience of feeling like they don’t meet up to their parent’s or societies expectations- for many different reasons. Sometimes it is real and sometimes it may be a projection, but either way it has an impact. I identified with aspects of Shannon’s character, but as I said earlier, it was the universal feel of the family dynamics that spoke to me in the script.

CMB: On the one hand, technology makes it a lot easier for just about anyone with the drive to make a film and get at least some kind of distribution, if only direct to video. On the other hand, getting an independent film into actual movie theaters is harder than ever. What are your thoughts on the state of film distribution for independent filmmakers today?
AR: Well, the world of independent film is a constantly changing industry. I think it is incredibly hard for independent films to find traction in the marketplace unless they are released through an indie studio or have a well-known director attached. We are doing a simultaneous theatrical and VOD release, but it is becoming increasingly difficult finding exhibitors willing to show a film with a VOD element. On the smaller budget releases, it makes sense to do this as one does not have the budget to do a wide release. It also gives people who live in the cities where the film will not play access to it immediately, which could be advantageous.

CMB: You've formed your own production company, Certainty Films, with Executive Producer Connie Cummings. What sort of projects will you be pursuing through this company? Will they all be films that you will direct, or will you be working with other filmmakers as well?
AR: Connie and I are both interested in blending entertainment that weaves a sense of true, purpose and meaning into our lives with a more conscious approach to filmmaking. We have a number of projects we are getting into development. Some I will direct, but I also plan to produce as well as work with other directors. We hope to eventually start up a production arm to support new voices and first time directors to get their projects made.

CMB: What does “success” mean to you as a filmmaker? Are you at all interested in working your way up the ladder to eventually direct mainstream Hollywood pictures, or is your heart in indie films?
AR: I think my heart is really in independent film/stories. Certainly I would like to be directing films at a bigger budget level, but only if the story speaks to me. I think success is not giving up on your dreams.