Horror Hotel Convention comes to Hudson, Ohio! (May 18th and 19th at the Hudson Clarion Inn) 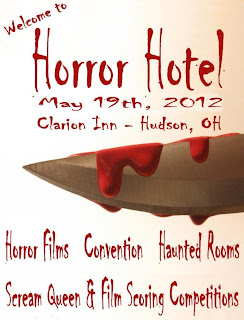 This is it! The  first full weekend all Clevelanders have been anxiously awaiting for months now, when the gamblers and hopefuls will take their chances and try to win BIG at games and entertainment. Fine food and chances at take-home winnings. I can only be speaking, of course, of the Horror Hotel horror movie convention in …

(You probably thought I was going to mention that new downtown casino, right? But instead I faked you out and will proceed to write about some weekend suburban horror convention. That’s something I call “clever writing.” I do that.)

That’s right, Cleveland will be overrun by mindless zombies, voracious bloodsuckers, maniacs lurking in the shadows and the foulest forms of depravity and corruption – okay, now this time I am talking about the downtown casino – but you can instead enjoy a nice, safe weekend horror convention in the suburban ambiance, ample parking at no charge and panhandler-free environ of the Clarion Inn and Conference Center, 6625 Dean Memorial Parkway in Hudson (just ask for the least crime- and blight-ridden part of northeast Ohio; it’s there).

Horror Hotel is a spinoff of the local filmmaker group The Indie Gathering, and it puts the emphasis largely on homegrown horror flicks and DIY cinema. Flicks being screened skew near to Ohio horror and slasher stuff, and who's to say any of it can possibly be worse than Hollywood’s Three Stooges reboot? Listen to these: NINJA ZOMBIES, MURDER MACHINE, HORRORS OF WAR (logline: Nazis deploy werewolves and monsters against the Allies; that’s the one that used the annual D-Day re-enactment on Lake Erie in Lake County as the real thing); RAGE, RAGE 2, BARON BLOODSTORM’S TALES TO TELL AT MIDNIGHT and more.

There will be themed rooms, demos, vendors, lectures and more - even networking opps and an audition or two for projects in progress. Can the downtown casino match that? There's an opening-night party at 9 p.m. on Friday, May 18. Regular convention hours happen Saturday from 11 a.m. to 11 p.m. Tickets are $20 for the whole festival. There's also separate admission to individual film screenings/events at $7 for features or $5 for short films.