Headhunters (opens May 18th at the Cedar Lee Theatre)

[HEADHUNTERS opens in Cleveland on Friday May 18th exclusively at the Cedar Lee Theatre.] 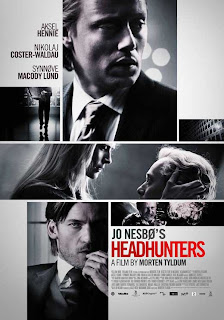 Norwegian director Morton Tyldum’s 2011 thriller HEADHUNTERS (Hodejegerne) is a gleefully dark little perpetual motion machine. It’s a bloodied-up coyote v. roadrunner chase flick that effortlessly flash welds spy-fi gadgetry to cold brute force, all the while folding in heists, corporate intrigue, adultery, and a relentlessly bleak sense of humor. Of course, to achieve such wicked momentum with such a clutter-glut of genre jollies, some of the overarching logic has to be shaved off… but it’s for reasons of aerodynamics, and the story moves all the better for it.

For folks who don’t mind losing some potential pathos to kinetic black comedy (or renting a winch to suspend disbelief) this stuff is top flight.

Roger Brown (Aksel Hennie) is a smooth-talking corporate headhunter who moonlights as an art thief in order to provide a lavish lifestyle for his blonde bombshell of a wife, Diana (Synnøve Macody Lund). During a CEO search for a major technologies firm – a search Roger uses to affably interrogate candidates about their art collections – he meets Clas Greve (Nikolaj Coster-Waldau), a roguishly handsome ex-military suit with a genius for designing tracking technology and a jaw-droppingly valuable painting in his living room. In debt from living beyond his means, Roger throws caution to the wind and goes in for the steal. *buzzer indicating bad decision*

HEADHUNTERS doesn’t succeed because it defies expectation, but rather because it ensures that the audience doesn’t have the chance to hone an expectation in the first place. From the moment the pursuit begins, screenwriters Lars Gudmestad and Ulf Ryberg, who adapted the story from Jo Nesbø’s novel of the same name, throw out complications and reveals with all the speed and regularity of a pitching machine. It’s not long before it’s suggested that perhaps the painting was just an inciting McGuffin, heralding a story that reaches deep into the characters’ personal and professional lives. The stretching of viewer credulity, however, is nothing compared to the maulings, mutilations, and physical indignities (including one of the more grotesquely comedic toilet explorations since TRAINSPOTTING) that follow in Roger’s desperate wake as he tries to retain control and stay, like, alive.

The casting here is just type enough to tip off Tyldum’s understanding that, wound for disfiguring wound, it’s all in good fun. Short, wiry, and pale, Hennie (A SOMEWHAT GENTLE MAN) is fantastic at portraying a confidence that we know, from both his narration and gradually unspooled vulnerability, is a mask to cover a lack of self-confidence and fear that Diana will leave him for some taller, ruddier slab of macho. Meanwhile, Coster-Waldau’s (Game of Thrones) Greve is tall, ruddy, bestubbled, and about as slabbed out as they come; he pursues Roger with the brutal, methodical patience of a resurrected Vorhees. Roger, of course, has no choice but to flee, mouselike, from his dogged pursuer, desperately trying to keep his brain running at the same speed as his bruised body.

What separates HEADHUNTERS from the antic two-dimensional capers of action comedies like the disappointingly staid SHOOT ‘EM UP, or by-the-numbers heist procedurals like OCEAN’S 13, is its treatment of Roger’s emotional life. I’d even buy the argument that, at its heart, the film is a toothed-up love story, soft and gooey beneath the deafening hail of munitions. It’s all done in broad strokes, and beats that could have been played for pathos are lost amid a flurry of bodily contusions, but in a fundamental human way, we understand Roger.

As the film begins, he’s already running - not from any violent foe, but from his wife’s desire for children. It’s a seemingly instinctual fear he neither comprehends nor attempts to parse, but as he peels through skin and shoe soles, tearing off suits and burning through tires - beating pavement away from Greve and shedding his entire façade in the process - he begins to understand his reproduction anxiety. Facing his own insecurities, he becomes a pursuer himself, turning fear-drenched flight into a determined venery, chasing down self-acceptance and selfless love.

America has certainly demonstrated a google-eyed love affair with Scandinavia’s darker artistic offerings – the genre even has a name: Scandi Crime. Studios have both released and remade The Millennium Trilogy and LET THE RIGHT ONE IN, and scheduled prime festival screenings for films like TERRIBLY HAPPY and JAR CITY. That HEADHUNTERS is already slated for an English language remake is unsurprising – it’s a requisitely gruesome thriller with enough expositional acrobatics to sate even the most jaded popcorn movie connoisseur. The question is, will the remake manage to capture the film’s full tonal range and successfully replicate the joyful cinematic spectacle, with the comedy holding the horror in check and all of it wrapped in white-knuckled action and romance? Or will it vacuously play to one or the other?