[FIRST POSITION opens in Cleveland on Friday May 18th exclusively at the Cedar Lee Theatre.] 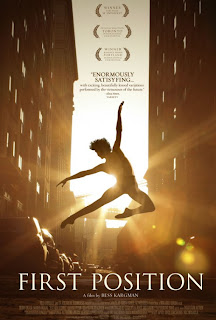 Following the efforts of six young people aged nine to nineteen to do succeed at the Youth American Grand Prix, a prestigious ballet competition with considerable rewards, one might expect FIRST POSITION to share certain disturbing similarities with reality shows like Toddlers With Tiaras or the child actor documentary THE HOLLYWOOD COMPLEX. Thankfully, it does not. There are no stage parents pushing these kids; in fact, some of the parents express surprise that their children decided to go down this path, while at the same time expressing pride in just how well they've done. And all of those profiled in this documentary must have done very well, indeed to have made it this far in the competition.

All of the film's subjects are talented and likeable, and we genuinely want to see all of them do well. 11 year old American army brat Aran is a natural, very possibly destined to be a star. His Israeli friend Gaya seems a little less serious, but still displays considerable talent. Twelve year old Miko Fogarty and her ten year old brother Jules are the only ones in the bunch who might be getting pushed a bit by their parents, but at least one of the siblings clearly has a genuine personal desire to excel. Orphaned in Sierre Leone and adopted by Jewish American parents, 14 year old Michaela DePrince easily has the most dramatic story. Columbian Joan Sebastian Zamora misses his family, but knows that dancing may well be his only chance at a better life. Finally, 17 year old Rebecca Houseknecht is an all-American teen who, despite her talent, seems a little self conscious about how “weird” her pursuits make her seem to her peers.

The amount of hard work and sacrifice required of these contestants is staggering, but again, none of them seem to have any regrets. This is what they want, and they will endure anything to get there. Ironically, even those who do wind up with scholarships have no guarantees of a career in ballet – dance companies simply aren't hiring that many performers. It poses a sad question: what's the point of putting so much time and effort into mastering a skill that only a few people these days appreciate?

Even those who don't know the first thing about ballet, which includes this reviewer, should be able to appreciate FIRST POSITION. At its heart, this is a film about people pursuing their dreams no matter the cost, and regardless of what those dreams are, these are all interesting people. If in the end it all feels perhaps a little lightweight and too upbeat, it's nonetheless been an enjoyable hour and a half spent watching true artists with true passion for their work. 3 out of 4 stars.