Fireworks Wednesday (May 17th and 18th at the Cleveland Cinematheque)l

[FIREWORKS WEDNESDAY screens Thursday May 17th at 8:45 pm and Friday May 18th at 7:30 pm at the Cleveland Cinematheque.] 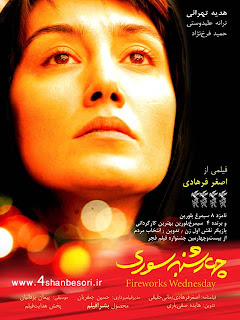 I don't comprehend why the gays want so eagerly to have a Constitutional right to be married. I'm not even so sure heterosexuals should have the right to be married. If waterboarding is considered a human-rights violation, certainly marriage meets the Geneva Convention definition of torture. And speaking of waterboarding, and bad marriages, with the United States probably heading for ruinous war with Iran we'll make this topic a nice happy segue into FIREWORKS WEDNESDAY, a tense marital drama from the world of Iranian cinema, made in 2006 but just reaching these shores. With any luck - "Insh'Allah, as they say - Iran's nuclear missiles will be just as slow crossing the Atlantic.

The action of FIREWORKS WEDNESDAY takes place during the New Year holiday when celebrating rowdies are lighting fireworks everywhere. Yeah, if you think the redneck-Bubba primate fascination with gunpowder going off is bad in Cleveland, it's even worse in Tehran; tumult and chaos tighten outside the screws on an unhappy household situation. Rouhi, a newlywed young maid still in the blissful-honeymoon stage, is hired to clean some adjacent apartments in an urban high-rise. Rouhi steps into an emotional minefield, with upscale Mrs. Mojdeh Samii in a neurotic meltdown, consumed with suspicion that her husband is having an affair with another woman in the building.


Some offscreen domestic violence has resulted, and since Rouhi has been cleaning for the same accused mistress, she's caught in the middle - and able to blow things sky-high or resolve them with some prudent lies. What should she do? And will her glimpse of couplehood at its worst affect her own idyll with her man?

FIREWORKS WEDNESDAY is done like most Iranian films, in an unadorned style and simple, direct edits not calling much attention to mise-en-scene (making Clint Eastwood and Peter Bogdanovich look practically MTV). Initially it's frankly a little confusing, until one finally gets a grip on the comings and goings and angry door slams, and the narrative grabs you. As night falls the fireworks grow more intense and anarchic (there's even been a possible murder somewhere in the backstory). The urban streets hellishly on fire reflect the character's inner darkness and turmoil - or what most Ohio college campuses look like now with their spring block parties that turn into frat-house fires.

(On that note, way to go, Kent Staters. Keep working on the binge-alcoholism and you'll do just fine. You'll even be able to drunkenly flag-wave and support the future US-Iranian war with no fear of you personally being drafted to fight, thanks to your life-threatening enlarged-liver syndrome. Limbaugh didn't even have an excuse that good for skipping Vietnam.)

So did Mr. Samii cheat on Mojdeh or not? What happens in the end isn't a cut-and-dried wrap-up, like in most Great Satan Hollywood dramas, but still feels emotionally satisfying. And very sad.

Oh well, if anyone deserves marriage it's the radical Muslims. At Gitmo they should threaten the captured ones with marriage. As for you idiot homosexuals, I warned you, I really tried to warn you. I could have been your Oskar Schindler. (3 out of 4 stars)
Posted by Charles Cassady Jr. at 12:01 AM