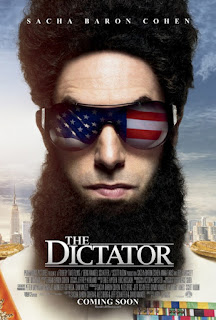 Let’s face it, Sacha Baron Cohen’s megahit BORAT was comedy lightning in a bottle, a once-in-a-career spoof in which the mockumentary format and Cohen’s taboo-edging satire found a perfect syncopation. And while he’s done good work before and since (Ali G rulez!), the UK funnyman hasn’t hit quite that high a note again. It’s okay, even Charlie Chaplin couldn’t be Charlie Chaplin all the time (but came close).

THE DICTATOR (which was not screened for critics, like a SAW sequel), is Cohen’s latest character-driven farce. In its funniest moments it’s gut-busting hilarious. In its lesser moments…well, still gotta be better than BATTLESHIP or THE LOVE GURU. Okay, just BATTLESHIP.

Cohen’s creation here is Admiral-General Aladeen, a self-consciously selfish, conceited, politically incorrect long-bearded potentate in the mythical Arab oil-igarchy called Wadiya. So absolute is his power that half the words in the Wadiyan language have been switched for “Aladeen.” When not ordering executions or bribing a-list stars to have sex with him (a running gag that inspires cameos by Megan Fox and Ed Norton), Aladeen defies UN weapons inspectors ordering him to come clean over his nuclear development. Portentiously, he pines, as a poor-little-rich-dictator, for real love.

Aladeen’s chief minister (a throwaway part for Ben Kingsley, shades of LOVE GURU) conspires to overthrow the dictator and initiate a “democratic” regime – meaning, essentially, selling out to Big Oil and Chinese multinationals. To make a long story short, Aladeen is switched for his imbecile assassination-target public double, and the real strongman winds up an anonymous nobody on the streets of Manhattan. Here the ethnic quilt of NYC includes hundreds of Aladeen-hating Wadiyan refugees, as well as a strident Occupy-type activist/organic LGBT-coddling grocer (Anna Faris) who takes in the incognito Aladeen. Very bad at making up pseudonyms, the dictator passes himself off as “Alison Burgers.” Naturally – unnaturally actually - they fall for each other, while Aladeen plots his comeback.

At heart, beneath the overpopulation of dick and pooh jokes, THE DICTATOR is a timeworn farce of a dislikable protagonist getting his humbling and evolving into a better person for the travails – except, of course, with real-life inspirations like Saddam and Kim Jong-Il, making the crass Aladeen onto the proverbial “good guy” is a tricky bit of business for Cohen and director Larry Charles. Good thing both can render a joke with the best of them and occasionally do get a shock-and-awe zinger in there along with the crude stuff.

And, yes, one might note a very faint resemblance to Chaplin’s classic THE GREAT DICTATOR. Both very much address modern times (I’m a clever writer, eh?), both involve totalitarians and their more humble lookalikes switching places; both end with a stirring climactic speech. Chaplin’s can still make a viewer break out in goosebumps. I can’t speak to your moviegoing experience but in the fairly well-populated auditorium in which I sat, Cohen/Aladeen’s truth-to-power rant about present-day America’s many dysfunctions brought a few gasps forth from the viewers that were a whole league away from the ones that accompanied the urine-drinking joke. No, it’s not Chaplin, but it’s something.

Now, one thing you may want to know (or, more accurately, I always want to know), is that, despite terrorist gags, expect no breathtaking spoofs of Islamic fundamentalism. By lofty BORAT standards even the mockery of anti-Semitism is fairly restrained. I always note this: No matter how “edgy” and iconoclastic a mainstream comedian is, with Christians, Jews, Mormons all fair game in the gunsights, the line in the sand stops dead at the Koran - even for South Park. No superstar (or their corporate masters) wants to be car-bombed or get Salman Rushdie’s type of popularity.

Moment of silence, please, for Jim Abrams, who actually did score some points against Muslim madness in his expressly conservative satire AN AMERICAN CAROL, a box-office dud I don’t even think the Tea Party patronized. 2 1/2 out of 4 stars.
Posted by Charles Cassady Jr. at 12:57 PM