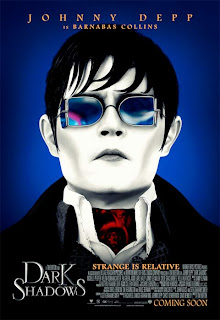 It’s anyone’s guess as to whether my ardent Tim Burton fandom departed amicably along with the misplaced artistic pretensions of my suburban adolescence or whether it was simply beaten to death by Burton’s own aesthetic stagnation and string of failures (PLANET OF THE APES, CHARLIE AND THE CHOCOLATE FACTORY, ALICE IN WONDERLAND). Either way, I went into DARK SHADOWS with precisely zero expectations, and left pleasantly surprised. Actually, “surprised” might be the wrong word. All of Burton’s quirks and precious obsessions – the gnarled trees, spackle of dark-rimmed pancake foundation, Giallo-bright blood, and laborious set design – are in full force, and predictable as ever. But when combined with the film’s over-the-top ‘70s milieu and all the head-butting, lip-locking soap opera theatrics, Burton’s cutesy Goth froth feels like a natural extension of the story’s innate faux horror melodrama.

The movie is a reimagining of ABC’s late ‘60s cult horror soap Dark Shadows, a show known for using supernatural elements and wild paranormal plot twists to up the ante on the already larger-than-life antics of daytime television drama. The story revolves around the Collins family, a once-wealthy clan of fishing magnates who founded the harbor town of Collinsport, Maine, upon which they gaze from the high-arching windows of their outlandishly gothic mansion, Collinwood.

I have to stop here to point out that  Burton’s fantasy fare is at its visual best when the story's setting is restricted, the sets constructed as elaborate stagecraft rather than the freewheeling CG chaos of Wonderland or the chocolate factory; I prefer when he can focus all of his feral, unwieldy imagination on a controlled number of rooms and set-pieces, like the Maitland’s house in  BEETLEJUICE, or, in the case of DARK SHADOWS, the gloomy, decaying Collinwood, which, with its cephalopod chandelier, elaborate mer-creature carvings and ocean-patterned carpet, recalls another fictional New England horrorville – Lovecraft’s Innsmouth. Not only is the crumbling maritime austerity gorgeous in its own right, it’s also juxtaposed perfectly with the intentionally heightened reality of the film’s era-specific trappings, which could have come straight from some wonderful, pre-packaged kit: Baby’s First Period Piece – the Swingin’ ‘70s!

The film pulls various plotlines from the show’s early run, telling the story of Barnabas Collins (Johnny Depp), the house’s master from two centuries past, who was vampirized and entombed by his spurned lover, the nefarious witch Angelique Bouchard (Eva Green). Awakening in the 1970s to find the family fortune squandered and Angie still alive, well and iron fisting all of Collinsport’s business interests, Barnabas press-gangs the ragtag remnants of the Collins clan – reclusive matriarch (Michelle Pfeiffer), her angsty daughter (Chloe Grace Moretz), eccentric young son (Gulliver McGrath), and the kid’s soused shrink (Helena Bonham Carter), among others - into resurrecting the family’s former glory.

When handling material with such a high camp factor, it’d be easy to let a good-faith tribute spiral into ruthless parody, but Burton and screenwriter Seth Grahame-Smith (ABRAHAM LINCONL: VAMPIRE HUNTER) nail the tone, laughing along with the story’s kitschier conceits (an immortal witch running a cannery, say) without ever taking the plot for granted or turning the quirky characters into punching bags. It also mercifully spares its audience any exposition-clogged mythologizing on the arcane rules that govern vampires, ghosts and the like; it’s content to stop at, “Vampires burn in sunlight, ghosts are see-through, now back to the schemes and skullduggery of hot, randy nightwalkers…”

It is, after all, a comedy,  and Burton’s gotta squeeze out some big chuckles somehow. Unfortunately, he lands on a consistently lame series of fish-out-of-water jokes involving Barnabas’ awkward navigation of ‘70s culture and technology. Though Depp is predictably deft at portraying the blue-blooded vampire’s ye olde affectations, too often the gags amount to Barnabas talkin’ funny… or thinking Alice Cooper is a woman. Because, you know, Alice is usually a girl’s name. Get it? Likewise, many of the film’s physical bits, including a ludicrously cartoonish undead sexcapade, go so big, they overwhelm the tone entirely.

DARK SHADOWS’ biggest success is in faithfully retaining the narrative rhythm and pace of a half-hour television soap. Aside from a slowly advancing feud with the film’s witchy big bad, there’s no driving narrative force. Instead, the characters play off each other, acting out their selfish agendas, desperate fantasies, petty jealousies and horny frustrations in miniature sub plots and individual scenes. Still, it's ultimately engineered for the big screen, and wraps up in an overblown, action-stuffed climax that, aside from some fantastic physical acting by Green, offers little but some signature Burtonisms amid fire and noise. Needless to say, it’s in its less self-consciously blockbusting moments – the light touches, fang licks and stolen winks - that the movie occasionally thrives. (2 1/2 out of 4 Stars)