The Custom Mary (May 19th at the Ohio Independent Film Festival)

[THE CUSTOM MARY screens Saturday May 19th at 7:00 pm at the Ohio Independent Film Festival.] 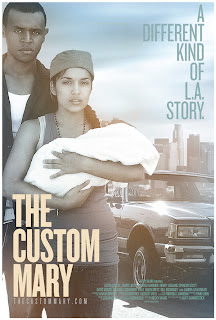 If you believe, as a good number of people do, that the Shroud of Turin was used to cover the body of the crucified Jesus, then it stands to reason there might be some of his DNA on the object. From there, it's another small leap to the premise of THE CUSTOM MARY, which is that one could clone Jesus. The vessel chosen for this purpose is a modern day virgin Mary (Alicia Marie Sixtos), a pious young Latina who works at a translation office. That's where she meets Joe (James Jolly), a young black man who customizes cars, turning them into lowriders.

The two start seeing each other, while at the same time the pastor of Mary's church tells her that a shadowy group wants to use her to bring about the second coming. Although she has a few doubts (one would hope), Mary eventually assents to the procedure. When the baby is born by C-section almost 9 months later on Christmas Day, however, he isn't quite what the true believers were expecting: The boy is mute, and his dark skin makes some suspect that the child is perhaps Joe's rather than the reborn son of God.

Provided you're the sort who isn't offended outright by this premise, that's a pretty good set up. Sixtos and Jolly are likeable and talented in the lead roles, and writer/director Matt Dunnerstick delivers some interesting visuals as well as some well crafted narration. After a strong start, though, the movie just runs out of gas. Dunnerstick tries to keep the tone serious, but he's not able to sell all the film's bizarre plot elements as being believable. A more over the top approach akin to something like Alex Cox' REPO MAN might have better served the tale.

Making a good movie is no easy task, even under the best circumstances. Just look at all the bad and mediocre ones that get released. It's even harder to pull off when you're working with a micro budget. Still, although it ultimately comes up short, one has to respect the efforts of Dunnerstick and his cast and crew to make a film this daring and original. It doesn't completely work, but there's enough here of interest to make THE CUSTOM MARY worth a watch. 2 1/2 out of 4 stars.
Posted by Bob Ignizio at 12:01 AM