Crazy Horse (May 12th and 13th at the Cleveland Cinematheque) 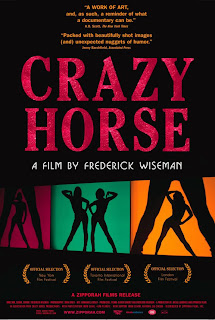 Frederick Wiseman, who is now 82, has been making his own brand of documentary films since 1967. A lawyer who became a filmmaker, he created a style that has been called “observational cinema,” in which his camera captures the daily life of an institution – a high school, a public housing project, a battered women's shelter, a welfare office, a racetrack and, in TITICUT FOLLIES (1967), Massachusetts' Bridgewater Hospital for the criminally insane. Wiseman rejects the term “cinema vérité” as pompous and meaningless. He doesn't merely “hang around,” he says; he edits the hundreds of hours of film he shoots rhythmically and meaningfully to tell a human story.

Many of the films are deeply moving, and in some cases, they have exposed abuses and helped bring about reforms. TITICUT FOLLIES, after being banned for many years, influenced the eventual closing of Bridgewater. But not every subject is equally well served by Wiseman's technique. In recent years, he has focused on lighter subjects – a boxing gym, the American Ballet Theatre, the Paris Opera Ballet and now, The Crazy Horse, the legendary Paris cabaret. CRAZY HORSE, Wiseman's 39th film, follows rehearsals, preparations and backstage activities in preparation for the club's latest nude dancing extravaganza, called Desir.

There is a great deal of nudity in CRAZY HORSE, but for Wiseman's method to work, there must be a story to tell, and the film does not find it in the quotidian activities of the nightclub's director, costumer, choreographers and dancers. The footage is expertly edited, but the questions that naturally arise about the club go unanswered. What's it like to be a Crazy Horse dancer? What kinds of patrons visit the club, and what brings them there? What about the history of the club, which opened in 1951? Wiseman's camera focuses entirely on rehearsals, meetings and backstage procedures. over 134 minutes, it becomes repetitive and, unlike the dancers' minuscule costumes, unrevealing. Only a few sequences touch on human feeling. In one, Ali, a gaunt, bald young man who is the club's artistic director, reveals his lifelong obsession with The Crazy Horse. For Ali, whose other obsessions have included Marlene Dietrich and Helmut Newton, working at The Crazy Horse is like a dream. He effuses, “I have to pinch myself to make sure I belong to this place of ultimate refinement, beauty and desire.”

Beauty, they say, is in the eye of the beholder, and it's worth noting that the Crazy Horse's standard is not to everyone's taste. The dancers all seem to possess the same body – very slim, with long legs and small breasts. The primary erogenous zone at “The Crazy” is the derrière. The dancers are encouraged to thrust out their small, round behinds as part of every routine, and an embarrassingly silly musical musical number sings the praises of the posterior, while the girls' fannies are illuminated with big polka dots. The lyrics, for your delectation, begin thusly: Baby buns is what they call me when I pass/Everyone is always looking at my ass! The revue's staging, costumes, lighting and choreography are elaborate, and the dancing often as gymnastic as a nearly-naked Cirque du Soleil. But the aesthetic, described as “chic” by its creators, is sheer camp. It would be appropriate – and scads more entertaining — in a drag club.

Of course, it is not by accident that the dancers all adhere to a particular physical ideal; they are selected for those features. The film's most interesting and harrowing sequence shows the audition process, in which a lineup of nearly nude hopefuls are instructed to perform individually (“thrust your buttocks out”) and told they will be judged for their bodies, not their dancing. As they are lined up on the stage, we hear the selectors' whispered remarks about the girls' physical attributes. It does make you wonder about what kind of personality is attracted to nude dancing as a profession. Unhappily, the film doesn't include interviews with the dancers.

Wiseman once said, “Human behavior is so complicated, and my goal is to begin to suggest that complexity.” In films such as this one, however, the lack of even an implied point of view is frustrating. CRAZY HORSE offers a titillating glimpse into a world unseen by most of us, but its subject may be too superficial to provide any complexity. 2 1/2 out of 4 stars.