Cirkus Columbia (May 10th and 11th at the Cleveland Cinematheque)

[CIRKUS COLUMBIA screens Thursday May 10th at 6:45 pm and Friday May 11th at 9:45 pm at the Cleveland Cinematheque.] 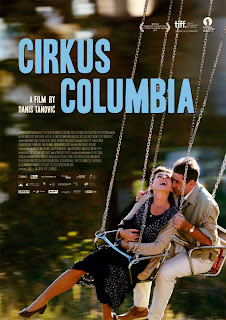 It's the early nineties, and 20 years after fleeing to Germany to avoid war, Divko Buntić (Miki Manojlović) returns to his home town in the now former Yugoslavia a wealthy man with a pretty young girlfriend (Jelena Stupljanin), a fancy car, and a cat he considers his good luck charm. One of his first actions is to bribe a local official to evict his wife Lucija (Mira Furlan) and son Martin (Boris Ler) from the home they've been living in ever since Divko left. He then sets about trying to drive a wedge between Martin and his mother by offering his son keys to the house. Martin, however, is more interested in his shortwave radio, and perhaps his father's girlfriend, than in any kind of reconciliation with this man he barely knows.

Like his Academy Award winning debut film NO MAN'S LAND, director Danis Tanović's CIRKUS COLUMBIA uses an intimate, human story to comment on larger issues. We see Divko determined to stick it to those he feels have slighted him (even when the slights are more imagined than real) and certain in the power of his wealth to get him what he wants. Many of the supporting characters we meet are nursing grudges of their own, or else chasing after the bribes and rewards Divko so casually tosses around. Meanwhile, almost everyone dismisses the signs of impending war that threaten to make everyone's plans moot, regardless of wealth or station.

Despite the spectre of doom always lurking at the periphery, Tanović treats much of CIRKUS COLUMBIA as lighthearted farce. He wants us to like these characters, flaws and all, and to laugh at their foibles while hoping they somehow overcome them. That makes the impact all the greater when things finally, inevitably take a turn for the worse. Even at its darkest, however, CIRKUS never approaches the scathing satire and bleak irony of NO MAN'S LAND, nor does it make any pretense of trying to. Still, if its observations aren't as razor sharp nor its humor as pitch black as that of NO MAN'S LAND, CIRKUS COLUMBIA nonetheless manages to be both entertaining and insightful, offering a somewhat less misanthropic, though by no means entirely hopeful, view of the world. 3 out of 4 stars.