[THE BEST EXOTIC MARIGOLD HOTEL opens in Cleveland on Friday May 11th exclusively at the Cedar Lee Theatre.] 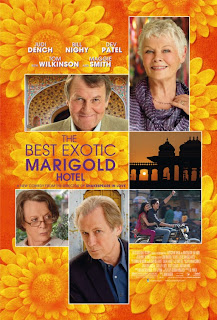 THE BEST EXOTIC MARIGOLD HOTEL is based on a novel by British author and screenwriter Deborah Moggach called These Foolish Things. Its amusing premise is that the UK health system is so overburdened that the government decides to outsource the care of the elderly, as it has so many other industries, to India. And so it is that a disparate group of English seniors go to live in a once palatial, now ramshackle retirement hotel in India. They find unexpected rejuvenation in the teeming, colorful, friendly, disheveled, lively culture of India (Bangalore in the novel, Jaipur in the film).

Adapted for the screen by Ol Parker, the story partakes of a long tradition of colonialist literature that examines the unusual relationships between the British and the inhabitants of its erstwhile colonies. MARIGOLD avoids any deep analysis, playing the cultural contrasts for humor rather than criticism (George Orwell), humanism (E.M. Forster) or imperialism (Rudyard Kipling). The author's interest seems to be in the plight of the elderly; her characters find themselves in various ways alone and alienated from English society. Moggach portrays them with a wry but sympathetic view similar to that of certain other English women novelists, like Muriel Spark and Margaret Forster.

The movie's qualities are a bit of a jumble. Briskly directed by John Madden, it is by turns sophisticated and silly, insightful and banal, with its multiple story lines resolved in maddeningly (or Maddeningly) simplistic ways. The good outweighs the bad, chiefly because the setting is colorful and pleasant, and there are so many worse ways to spend two hours than in the company of a cast of marvelous British actors and actresses in their 60s and 70s.

The splendid Maggie Smith plays Muriel, a curmudgeonly bigot who needs hip replacement surgery and whose doctor “outsources” her treatment to India. Too bad the crusty Muriel holds Indian people in such low regard – their “brown faces and black hearts” and the way they “reek of curry.” Nevertheless, she is shipped off, reluctantly, to the Marigold, whose misleading ad campaign (“For the Elderly and Beautiful”) and offer of free airfare has enticed several other old Britons to come to India. They include Douglas and Jean (Bill Nighy and Penelope Wilton), an unhappily married retired couple who lost their savings investing in their daughter's Internet business; Graham (Tom Wilkinson), a retired judge in search of a long-lost love in India; Norman (Ronald Pickup), an elderly roué looking for new, younger sex partners; and Madge (Celia Imrie), a well-preserved grandmother looking for romantic adventure.

The centerpiece of the group is Evelyn (pronounced “EVE-lyn,” like Evelyn Waugh), played by the always welcome Judi Dench. Evelyn has found herself homeless after her flat is sold to pay her late husband's hidden debts, and embraces the journey to India with zest, learning the Internet and becoming a blogger to chronicle her adventure. Her blog prose serves as a useful narrative device that holds the stories together. Inexperienced in the ways of the world but eminently practical, Dench talks her way into a job as a “cultural adviser” at a call center -- instructing telemarketers how to better speak to elderly Americans --  enabling her to live in India as a permanent expat.

The seniors' stories intersect with a Bollywood-style plot about the comically optimistic hotel proprietor, Sonny (Dev Patel, in a variation on his role in SLUMDOG MILLIONAIRE). Sonny is trying to fulfill his late father's dream by restoring the shambling hotel and establishing a new manner of outsourcing elder care. He also wants to marry his beautiful girlfriend, Sunaina (Tena Desae), who works at a call center. Sonny's dreams are threatened by the appearance of his imperious mother (Lillete Dubey), who wants to sell the hotel and haul Sonny back to Delhi to enter into an arranged marriage.

The retirees variously pursue their dreams. Some fulfill them, some resign themselves to not fulfilling them, and another fulfills them and shortly thereafter, dies. Bill Nighy brings a wonderfully diffident charm to Douglas, who savors the sacred temples and exciting terrain while his uptight wife Jean sits in their room, seething about the bad plumbing, the unfamiliar food, and ultimately, about Douglas. He finds solace in a budding friendship with the calm, level-headed Evelyn, and Jean pursues a girlish crush on Graham, who is preoccupied with finding the lover of his youthful days. Social embarrassment is a theme the English do particularly well, and this story is nicely realized. Less enjoyable (and more yucky) is the portrayal of lecherous Norman's pursuit of compliant women and long-lasting erections; a scene of him dancing in the shower is perhaps the movie's most uncomfortable moment.

Parker's screenplay is crisp and breezy, and its portrayal of the Indian people's idiosyncratic English rather amusing (“Down is where you are going, Uncle” says one of the boys who is winning a street game of cricket against Graham). As is often the case with ensemble comedies, some stories get short shrift (nothing much happens to Madge, for example), and the script also dusts off some surprisingly hoary humor: asked if he's concerned about having marathon sex at his age, Norman replies, “If she dies, she dies,” a joke so old it voted for Eisenhower. Also, in a shortcoming inherited from the book, the characters – even the hidebound Muriel – are transformed instantaneously. How do you say “Deus ex machina” in Hindi?

Nevertheless, the experience is a mostly pleasant one, enhanced by the venerable actors, Ben Davis' lovely cinematography and Thomas Newman's evocative Indian-inflected score. (3 1/4 stars out of 4)
Posted by Pamela Zoslov at 12:01 AM