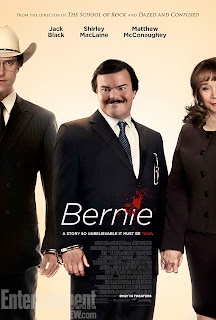 There's a bumper sticker that bears the slogan, “some people are only alive because it's against the law to kill them.” In the case of Marjorie Nugent, a woman generally regarded by everyone in her hometown of Carthage, Texas as especially mean and spiteful, the law eventually proved insufficient. Marjorie was shot four times in the back by her one and only friend and companion, the town's well liked assistant funeral director Bernie Tiede.

That in and of itself would not be particularly remarkable, but it's the bizarre and often darkly comic details that make one doubt the “based on a true story” tagline of BERNIE. Surprisingly, even the most far out elements of in Richard Linklatter's film seem to have happened pretty much the way he depicts them. At times Linklatter even goes so far as to blur the line between docudrama and documentary by interviewing several real Carthage residents, most of whom seem to be on Bernie's side.

Bernie is played in the film by Jack Black, an extremely talented guy who unfortunately has a habit of picking lousy film projects to be in. This is arguably the first really good role he's had since his breakthrough supporting performance in HIGH FIDELITY, and Black makes the most of it. His Bernie is quirky, but in an understated way. And since the real life Bernie sang in the church choir and various musical productions in town, Black also gets a chance to show off his singing talent in a way that feels organic and appropriate to the film.

Shirley MacLaine doesn't get nearly as much screen time playing Bernie's victim, but she nonetheless makes an impression. Again, there's nothing over the top about the performance. Maclaine's Marjorie is very calculating in her cruelty, with the real nastiness always just simmering beneath the surface waiting for the right moment to bubble over.

Matthew McConaughey rounds out the primary cast as District Attorney Danny Buck, the man who prosecuted Bernie. McConaughey's performance comes closest to caricature, but accounts seem to indicate the same is true of the man he's portraying.

Although BERNIE gets most of its facts straight, not everyone in Carthage is happy about the way the film makes light of the murder, and that's an understandable objection. Comedy and tragedy are often intertwined in real life, though, and even if Linklatter had adopted a more somber tone there are some aspects of the events he's depicting where the comedy is just inherent. The right choice for the movie was either to embrace what was there rather than fight it, or simply not make the film at all. It's a moot point now, as the film has been made, and provided your own sense of humor leans towards the dark, it's a good one. 3 1/2 out of 4 stars.