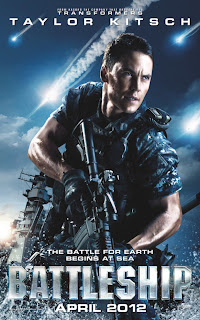 At the advance screening for BATTLESHIP I attended, I found myself talking to the person in the seat next to me. Seems he had already seen the movie while on vacation in England. His assessment of the film: “It's good. It's like TRANSFORMERS.” I pass no judgment on this man. The fact is, there are a lot of people out there for whom the two parts of that statement present no contradiction, and nothing a critic might say about such a film either way is likely to change their desire or lack thereof to see a movie like this. I guess that's why, after sitting through the first mind-numbing 90 minutes of the two hours-plus BATTLESHIP, I didn't feel all that guilty for deciding to walk out.

Perhaps in the final 40 minutes of the film which I missed, something surprising or at least interesting occurred. And perhaps, seeing as I did not stick with the film until the bitter end, I have no business reviewing it. That's your call as a reader to make. Regardless, I give you my thoughts on what I did see.

The review of the guy sitting next to me would probably cover the bases for most people, but I'll break it down a little further. It's like the plot from INDEPENDENCE DAY, only instead of Will Smith as a hotshot Air Force pilot, we get third-rate Channing Tatum wannabe Taylor Kitsch, recently of JOHN CARTER, as a hotshot Navy officer. The CG alien ships definitely have that TRANSFORMERS look, though. Pieces of these vehicles are constantly moving for no apparent reason, and they hop across the surface of the ocean like giant, ungainly mechanical frogs. Toss in enough gratuitous lens flare to annoy even J.J. Abrams, and that about sums it up.

Other observations: While I generally appreciate when modern action films bother to include at least some character development, I don't think we really needed to spend 30 minutes just to establish that Kitsch's character is an asshole; cheese fests like this have no business trying to be epics, and the tedious length and mostly serious tone director Peter Berg adopts just drive home how shallow the whole affair is; finally, Liam Neeson will apparently appear in any movie.

No star rating. I didn't suffer through the whole thing, so I didn't earn the right. Just refer once again to what the guy sitting next to me said. If, “It's like TRANSFORMERS,” sounds like your idea of entertainment, just write me off as another elitist critic and go see BATTLESHIP. If you're more like me and the idea of seeing anything even remotely like TRANSFORMERS sounds like torture, skip it.
Posted by Bob Ignizio at 12:01 AM