All Day Yeah (May 18th at the Ohio Independent Film Festival)

[All Day Yeah screens Friday May 18th at 6:00 pm as part of a program of shorts at the Ohio Independent Film Festival.] 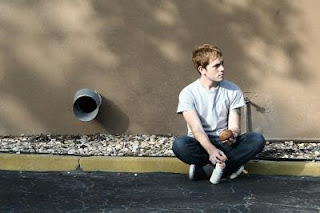 There's a trend in modern short stories to more or less forget about the “story” aspect and instead just capture a moment in time. While it's not my favorite approach, there are times when it works for me. The same holds true in short films. In general, I like a plot, but I'm not entirely opposed to dispensing with structure, provided it's done well. Charles Anderson's narrative in All Day Yeah may be a bit meandering, but it flows well, has some nice shots, and the performances feel naturalist. No complaints from me.

Basically we follow a slacker skater dude through his day, rummaging through unlocked cars for spare change, fixing his shoe with duct tape, stopping by his mom's house to find the locks have been changed, and so on. The one truly notable thing, which the skater dude at first ignores, is the discovery that one of the unlocked vehicles he rummages through has the keys inside. It's sort of an allegory for having the universe hand you something on a silver platter if you're just willing to take it. Does the skater dude take advantage of what he's offered? Hey, it's only 20 minutes out of your life to find out, so don't expect me to tell you. 2 1/2 out of 4 stars.
Posted by Bob Ignizio at 12:01 AM