[WE HAVE A POPE opens in Cleveland on Friday April 20 th exclusively at the Cedar Lee Theatre.] 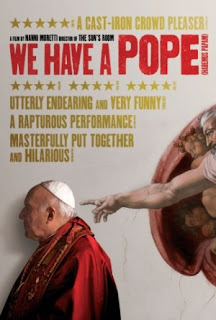 There's an old saying, often attributed to Otto Von Bismarck but evidently originating with John Saxe:
“Laws are like sausages — it is best not to see them being made.” The same thing might well apply to the process of picking a Pope, which is probably why it usually happens behind closed doors in a secretive conclave. WE HAVE A POPE (Habemus Papam) pulls back the curtain to reveal a fictionalized account of the process, aiming for lightweight laughs by showing what might happen were things to go awry.

Cardinal Melville (Michel Piccoli) is nowhere close to being a frontrunner for the papacy when the current Pope departs this mortal coil, but after several inconclusive votes, he somehow winds up with the job. You might think than anyone who had devoted his life to service in The Church for as long as Melville has would be thrilled with such a turn of events, but as the private prayers of the other Cardinals we're privy to attest, he's far from the only one who has no desire to take on such a weighty role.

The new pope tries to speak to the masses of the faithful waiting to meet the new representative of God on earth, but is unable to. A psychiatrist (Nanni Moretti, the writer/director of the film) is called in to help, to no avail. He suggests that his ex-wife, also a psychiatrist, might be better suited to the task, but after seeing her the Pope escapes from his handlers to try and work things out on his own. Will he accept his responsibility, and how long can the Church wait for him to decide?

As far as a premise for a comedy goes, it's not a bad one, and there are certainly some scenes here that elicit smiles and even a few chuckles. The performances are good and Moretti's direction is capable, but ultimately it feels like the movie lacks the courage to really shake things up like it seems to be saying it wants to. It's a pleasant enough ride, but it feels anticlimactic when it reaches its destination. 2 1/2 out of 4 stars.
Posted by Bob Ignizio at 12:01 AM