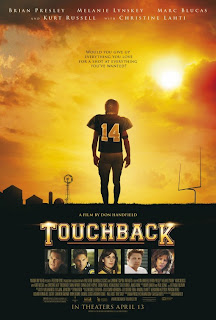 People love to whine and moan about how such and such a movie is “just a rip-off” of another film. We've seen this recently with THE HUNGER GAMES and BATTLE ROYALE. The truth is, though, there are only so many basic stories and they get recycled all the time. And as long as the recycling is done well enough, everybody is happy. Case in point: how often have you heard anyone complain that STAR WARS EPISODE IV: A NEW HOPE is “just a rip-off” of Akira Kurosawa's THE HIDDEN FORTRESS? If you've never seen THE HIDDEN FORTRESS, check it out and you'll see I'm not kidding. So it's not really an issue for me that the plot of TOUCHBACK is one we've seen variations on in countless movies and TV shows; it's what writer/director Don Handfield does with the premise that matters.

In a nutshell, TOUCHBACK combines elements of IT'S A WONDERFUL LIFE and PEGGY SUE GOT MARRIED, to name just two prominent films with similar plots. Scott (Brian Presley) was the star quarterback at a small southern Ohio school in his high school years. During the final minutes of “the big game”, Scott chose to ignore his coach (Kurt Russell) and run a different play. His decision results in victory for the team, but Scott winds up with a debilitating injury that dashes any hopes for a future in the sport.

Flash forward 15 years and Scott is a soybean farmer struggling to support his wife
(Melanie Lynskey) and two kids. The bank is about to foreclose on his home, and when the only harvesting machine available for rent suffers mechanical problems, it seems all hope is lost. So like George Bailey in LIFE Scott decides to end it all, using carbon monoxide fumes from his beat up truck instead of jumping off a bridge. No guardian angel arrives to intervene; instead, Scott wakes up to find himself transported back to his high school days ala PEGGY SUE. He's apparently been given a second chance, but changing the past could mean losing his future family.

TOUCHBACK is very much old fashioned schmaltzy filmmaking, but with the vast majority of movies these days trying so hard to be edgy, it's kind of a nice change of pace. You do still occasionally get this kind of thing from overtly Christian filmmakers, but TOUCHBACK doesn't ascribe any religious overtones to its miraculous happenings. Whatever your spiritual background (or lack thereof), you can watch the film without feeling like you're being preached to.

There aren't many surprises here. We know what Scott is going to decide and the main lessons he's going to learn long before he does, and we know one way or another things are going to turn out okay. The film's portrayal of small town rural Ohio life isn't perfect, but it's more realistic most films set in that milieu. There are other little details that the realism police will likely point out (for example, I don't know much about football, but even I know that quarterbacks don't run the ball almost every play), but given that this is a fantasy set as much in “old movie land” as 1990s southern Ohio, it seems petty to nitpick.

My biggest complaint is that the film is too long (almost 2 hours), with a good chunk of the unnecessary running time coming from the “big game” scene late in the film. Up until this point, TOUCHBACK has not really been much of a sports movie, and to suddenly throw in 20-plus minutes worth of game play, none of which feels all that exciting, is a misstep. And then there's the solitary black member of the Scott's team who has never actually played in a game, and in fact prefers to stay on the bench. I don't think there's any intentional overt racism here, but when the only black character in the movie is used solely as scaredy-cat comic relief, it's hard not to think of some of the less pleasant aspects of Hollywood's past portrayal of minorities.

Those caveats aside, I think Handfield does an okay job putting a fresh spin on this tried and true material. There aren't a whole lot of family films these days that mom and/or dad can go see with their tweens and teens without one faction or the other cringing, and I think for at least some families, particularly those living in small rural towns similar to the one depicted here, this would fit the bill. For me, it was a little too corny to fully resonate, but there were aspects of the movie I appreciated (like Scott realizing what a dick he used to be in high school), and in all honesty I wound up enjoying TOUCHBACK more than I expected. 2 1/2 out of 4 stars.
Posted by Bob Ignizio at 12:01 AM